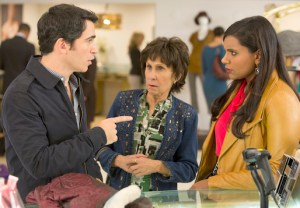 If Mindy Project‘s pocket-size Annette Castellano has stolen your heart, it’s no wonder: As we find out in this week’s episode, she steals lots of things.

And when Dr. Lahiri catches her boyfriend’s mom pilfering some goods from a department store, it sets off a series of events that ends with Danny wearing a bomber jacket and aviators and calling Mindy “Goose.”

Wanna know how it all falls into place? Read on as we review what happened in “We Need to Talk About Annette.”

MA LIVES DANGEROUSLY | Mindy hates paying for movies and music, so she goes to www.videodump.alqaeda.biz for all of her illegal download needs. Danny disapproves — shocker! — but she’s unrepentant, even when she downloads a terrible virus that destroys his laptop.

At dinner with Annette and Dot, Danny’s mom is excited about the water aerobics  synchronized seniors aqua disco class she’s about to take. Annette needs a new swimsuit, Mindy decides, and sets up a shopping date that pleases Danny.

OOPS | But at Shulman & Associates, Danny’s so happy when his mom gives him the coat, Mindy can’t bring herself to say anything. Later that day, though, Tamra’s charm bracelet (a gift from Morgan) goes missing and Mindy rushes out to Staten Island to confront Annette. Mrs. Castellano swears she didn’t take it… and when Tamra finds the bauble around her ankle (heh), Mindy and Danny are invited to dinner at Annette’s. What’s on the menu, you ask? Crow. Lots and lots of crow.

GOOSE, YOU BIG STUD! TAKE ME TO BED OR LOSE ME FOREVER! | Funny thing, though: After Annette makes Mindy feel bad for calling her a kleptomaniac, her watch gets caught on the collar of Danny’s prized jacket. It triggers the ink pack on the theft-prevention tag, alerting Dan to his mom’s duplicity. There’s a lot of talk about going back to the store and making everything right, but when the trio get there, the threat of “Gary” (whoever that is) being called in causes Mindy, Danny and Ma to flee like the not-so-juvenile delinquents they are.

Later that night, back at Danny’s place, Mindy pays for her first legally downloaded song: “Danger Zone,” AKA the soundtrack to Dr. Castellano’s Top Gun fantasies. “I got a real need, the need to squeeze,” he says, executing some very funny poses that I’m sure he thinks are badass and then calling out, “Hey Goose, it’s Maverick: You wanna have some sex tonight?” Mindy’s response? “Don’t call me Goose!” (Side note: You just know they did something dirty later that evening and called it “buzzing the tower” or a “4G negative dive” or “the Penny Benjamin.”)

THE LADY IS A DUDE (NOT LIKE THAT) | Elsewhere in the episode, Peter and Abby wake up after a night of “crazy sex”… to a morning of really bad ADR. Seriously, did any of you notice how obviously some of Abby’s lines had been laid in during post-production? Anyway, Peter assumes his new lady wants to go to brunch or put together shelves or something equally estrogeny, but she’s more into smoking up, drinking and basically having a really good time. “I’m like the Matthew McConaughey of the romance-novel world,” she says, blowing Peter’s mind. Well all right, all right, all right!

Turns out, though, that dating the lady version of one of his Dartmouth bros isn’t that fun. So when he’s called away from an all-night EDM show he’s attending with Abby to deliver a baby, he doesn’t come back… and she doesn’t seem to mind when he breaks up with her the next day. (To be fair, that reaction could be chalked up to her being hella high.) Bye, Allison Tolman! You were awesome while you lasted! And at least your storyline involved Peter wearing a puffy yellow cupcake vest that Danny found a little arousing!