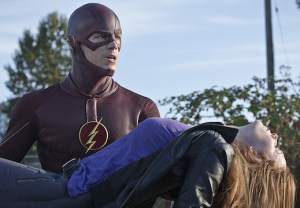 This week on The CW’s The Flash, Barry learned a few cool new tricks in the course of helping a metahuman deal with her “explosive” personality, while Iris came face to (blurry) face with her hero, the “red streak.”

This was perhaps the most Smallville-ian of the Flash episodes thus far, at least as pertains to the scenes where Iris’ persistent blogging about the “streak” earns her a visit from the speedster, with Barry vibrating his visage and vocal chords to conceal his true identity. Iris is all fangirly Lois Lane upon meeting the mystery man, and even seems a bit breathless at one point as The Flash circles her, closer and closer….

But then the sequence took a poignant turn, as Iris revealed the reason for her interest — because of her friend Barry, who since childhood has been trying to make sense of the “impossible.” Iris thus sees the hope/answers that someone such as the “streak” can provide her longtime friend. Her words visibly affect costumed Barry, who can only offer up in return: “He’s a lucky guy” before running off. (At episode’s end, Barry confronts Iris himself, asking her one last time to give up her blog — lying that he has put his mother’s murder behind him. When she refuses, he is left to declare their “friendship” on a break, her eyes wet.)

Will this new angst — coupled with that “intimate”-ish Irish/Flash rooftop scene — be enough to get viewers fervently ‘shipping Barry/Iris? It’s a start.

There was also some nice character work done this week with Joe, who after lobbying his daughter to give up her obsession with the “streak” noted how desperately Barry wants to tell her the truth about his alter ego. When Barry claims he tells Iris everything, Joe counters, “Not everything” — meaning, he has known since the day Barry was old enough to know what love is that his ward had feelings for his daughter.  (What’s more, Joe seems very much on board with that, though Barry just can’t ‘fess up to Iris.)

We also got a bit more of Cisco in not just metahuman fanboy mode, but legit crushing on Bette Sans Souci aka “Plastique,” especially as it became more and more clear that her options in life were few, if any. (We also learned that Cisco can be very protective of specific Flash suits.) And then there was further insight into what makes the ever-enigmatic Dr. Wells tick — first, as he faced off anew with an old adversary, Army General Eiling (played by Clancy Brown, who simply must return), and then in a flashback to the gents’ years-ago falling out, when Wells pulled the plug on S.T.A.R. Labs’ involvement in some controversial gene therapy. At the close of that flashback, we saw that Wells was specifically sparing test subject Grodd, a gorilla, for whom he himself had planned “a whole different future.”

IN A FLASH
* He’s so hot…. Genetically speaking. Because I’m a geneticist.”
* “I can’t get drunk! I’m 25, and my drinking days are already over.”
* “I have two [speed suits], and I loved that one.”
* “You didn’t really think this one through, did you?” — Caitlin chiding Cisco, holding up what could have been an explosive boomerang
* “You can walk on water. That puts you in pretty interesting company.” (That said, between that and scaling a building, let’s save some speedster tricks for the rest of the season OK?)
* Anyone catch (a cover of) “I Ran” playing during the final montage? Heh.

What did you think of this week’s episode and it’s ill-fated namesake, “Plastique”?