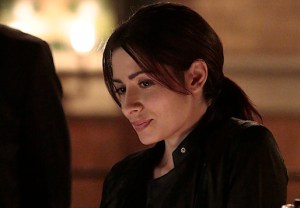 Tonight on Person of Interest (CBS, 10/9c), Shaw takes a particular interest in the POI as she gets swept up in a heist that at the very least threatens to blow someone’s Samaritan-safe cover and for certain tees up an “immense” twist for the remainder of Season 4. Sarah Shahi shared with TVLine a preview of the Shaw-centric hour.

TVLINE | Tell us about this week’s POI and how Shaw gets involved with him.
Shaw joins a very suave team of international thieves, in order to keep tabs on our POI (played by Adrian Bellani), but a very unexpected turn of events happens that puts her in danger of being detected by Samaritan. Shaw’s been messing around with this local smash-n-grab crew (led by Romeo), and these guys are high-end thieves that really know what they’re doing. They go all around the world stealing really cool stuff.

TVLINE | And what are they out to steal in this episode? 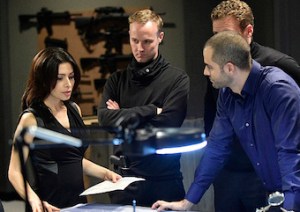 I don’t think I can tell you that. But I’ll tell you this: What they thought they were stealing isn’t what they steal.

TVLINE | Never mind, I’ve figured out the theft: Shaw steals… Romeo’s heart.
[Laughs] Oh my gosh…. Well in that case, I can’t wait for you to watch this episode. There’s a lot of fun stuff that happens, and being a Shaw-centric episode means there will be a lot of playful Root stuff. I can tell you that the POI (photo, far right) momentarily catches Shaw’s eye, because he’s so good and so talented at what he does. She’s drawn to that. This is a character who has a big appetite for violence, and anyone that can introduce that into her life “holds a special place in her heart.”

TVLINE | Which isn’t sick at all.
No, it’s totally normal. Totally normal! But that’s also how the whole Root thing started. Root (played by Amy Acker) is the kind of character where Shaw wants to punch her one minute, kiss her the next. As long as she keeps bringing the action, it’s all good for Shaw. 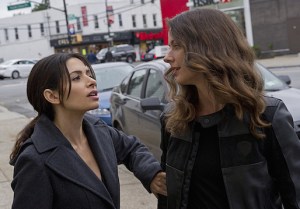 TVLINE | Amy in fact told me that at the end of the day, Shaw is Root’s “No. 1 crush.”
Yes, and I think Shaw is starting to agree with that. But because Shaw’s country presumed her dead and she kind of had to escape her own “death,” I never pictured it as, “OK, she’s part of a team” but “She needs extra eyes, ears and hands working to help keep her safe.” She’s a lone wolf. Does she have some attachments after all this time? I think the dog, Bear, has become an attachment for her. With Root, even though I agree with Amy and I think that Shaw probably does feel the same, is that anything that would ever keep her there? I don’t think so. Even that is something Shaw can walk away from at any time.

TVLINE | As much as you relish Shaw’s badassery, do you enjoy when she gets forced out of her comfort zone, spritzing perfume at Bloomingdale’s and what not?
Oh, those are the moments that I love. You don’t get to see very many cracks in Shaw’s veneer, so any moment I get to step outside her comfort zone and do something that exposes her, I’m just like, “I want more.” I’m a fiend for that kind of s–t.

TVLINE | Will the Martine character (played by Mad Men‘s Cara Buono) become a more and more of a constant threat to Team Machine?
Yes, she is. She’s definitely like the Terminator for Samaritan, and with every episode we see that Samaritan is gaining more power, more eyes and ears on the street. They’re always two steps ahead of us, and then we have to very quickly catch up to get a step ahead of them. It does feel like it’s a matter of time before these two sparring gods explode at one another. The show has done a great job at setting that up.

TVLINE | Before you go, one final tease about what’s to come?
You won’t want to miss the last 20 seconds of this week’s episode. Even if you don’t watch the whole episode — and it would be a shame for you if you don’t — watch the very end! Something happens which has an immense effect on the rest of the season and our gang. It’s gonna get real nasty, real quick.