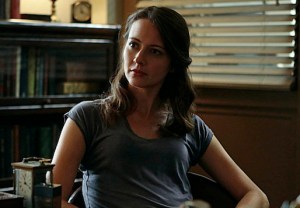 As CBS’ Person of Interest (Tuesdays at 10/9c) opened Season 4, it was Root, of all people, who needed to light a fire under Team Machine leader Harold Finch, who in the wake of Samaritan going online (and given the lives lost to date) had abandoned his faith.

But as Root noted, she, Harold et al still “have a god in this fight,” and with those words she nudged him toward caring about the numbers again.

As Team Machine slowly but surely reassembles, TVLine invited Amy Acker – who joined the complex, compelling drama in Season 1, and was made a series regular last season – to weigh in on Root’s evolution, her “interest” in Shaw, her dream S.H.I.E.L.D. encore and more.

TVLINE | Tell me about how the role of Root was very first pitched to you, versus what she has evolved into years later. Because it’s been an interesting path.
It has been! [Laughs] You know, [the producers] are not totally forthcoming with a lot of information when you get a part, so I really didn’t know what to expect. They told me that had introduced this hacker, but they’d only shown the back of her head and her black fingernail polish, yet she had caught on, so they were excited to expand this part. The first episode I got was where I was being somebody else – John’s psychiatrist – and that was all I knew. Then when I showed up the next year I was kidnapping Finch and doing more crazy Root stuff. It started to unfold from there. They told me I would probably be in five episodes, so….

TVLINE | Because even at that point she was more a nuisance, not any sort of puppet master. I don’t know, they may still consider me a nuisance. [Laughs] But now I’m around more to bug them more.

TVLINE | Was it almost odd to see Root in the premiere be the champion for the numbers, that it was she who had to get Finch back into the game?
That was such a turnaround, especially versus where I started last season. It showed that I had actually been listening when Harold was talking to me, that I had been able to learn the lessons that the Machine had been trying to teach me all along.

TVLINE | Now that the Machine has led Finch to this untappable communications network and a new “Batcave,” does She have a broader plan in mind that we’re launching into?
I don’t know what all I am allowed to say, but… my character is still trusting that She must have one, because that’s kind of the only way to go on, if there is a master plan. So I feel like at the start of this year it is my job to make sure that everyone continues to believe in Her, that She is there to protect us. There’s got to be a plan.

TVLINE | The synopsis for the Oct. 7 episode, titled “Wingman,” says that Root and Finch embark on a “mysterious errand.” Care to elaborate?
A “mysterious errand” sounds about right. The main story has Fusco going undercover [as a ladies’ man], so he’s getting this sort of makeover. At the same time, [Root and Finch] are acquiring things that will help in the new “Batcave.” We’re sort of getting the team ready for what’s to come.

TVLINE | Remind me, has the show ever indicated in which gender Root’s romantic interests lie? Well…. There’s definitely a lot of flirtation with Shaw. They’re not shying away from that, so that seems to suggest that she definitely likes her. But one time, I think it was Episode 17, I broke this guy out of jail and he helped me by posing as a delivery man and getting information for me, and as he was leaving to run from the police, I kissed him as I walked away. It seemed a little flirtatious. It seems like she’s not tied to one gender or the other, but I think her No.1 crush is definitely Shaw.

TVLINE | Do you and Sarah Shahi have fun leaning into that notion?
We do. We’re always looking at the script like, “I’m sure they meant it this way….” It’s fun because you can play it like I’m flirting with her just to mess with her, or because I know that it annoys her…. It does seem like the underlying truth is that they actually do care for each other. They’ve really gone out of their way to make sure that the other one is OK, in situations where their lives are in danger.

TVLINE | Will you get to have any scenes with Martine, the mystery woman being played by Cara Buono (Mad Men)?
I think I will…. I think she’s going to be around a lot, so I’m excited about that.

TVLINE | Lastly: What kind of TV does Amy Acker like to watch?
Oh, geez…. The problem with making TV is you don’t get as much time to watch it as you would like to. But I love Orphan Black — Tatiana Maslany is great –and I like True Detective, and I’m very excited to see [POI exec producer] Jonah [Nolan]’s new show [HBO’s Westworld], when it inevitably gets picked up.

TVLINE | Have you been keeping any tabs on Agents of  S.H.I.E.L.D., if only to see how Clark Gregg’s Coulson is holding up? [Acker last season guest-starred as Agent Coulson’s great love, The Cellist.]
I try to watch as much as I can, and I always tried to watch when J. August Richards was on, keeping the Angel days alive. [Laughs] They’re all such fun over there, and it seems like the show is doing great. Hopefully there’ll be a chance for me to go back and actually have scenes where I talk to Clark!