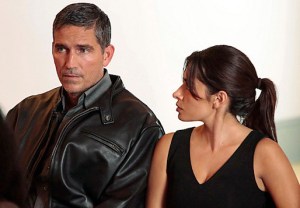 CBS’ Person of Interest with its Season 4 premiere raised the question: What if the Machine’s original and most diehard champion ceased keeping the faith?

The season opens with a (seeming) non sequitur, as a beleaguered journalist (In Plain Sight‘s Frederick Weller) vents to a beautiful stranger (Martine Rousseau, played by Mad Men‘s Cara Buono) at a bar in Budapest. The reporter spins a tale of an “artificial intelligence” that has stealthily invaded our society, observing the public’s every move. The woman allows for such a possibility, that an A.I. would buy the guy’s company and fire him, cancel his flight so that he’d end up at a bar with a glitchy security camera, and then send an emergency text that ushers away the barkeep, leaving them unattended. “The world has changed,” she declares, and three people thus far have realized it — two of whom soon will die in a car crash, and her new acquaintance, into whom she fires a bullet from across the table.

More on her later.

We then jump to New York City, where Senator Garrison is praising Samaritan’s skillz to Greer, yet also expressing “concern” to that Decima Technologies has dismantled, leaving him to wonder if Greer can be found if the jig is ever up. Privately to Samaritan, Greer wonders if the senator has outlived his usefulness, but is told “NOT YET” — one word at a time, via his cell.

* Shaw is now a (disgruntled, and frankly lousy) perfume spritzer at Bloomingdale’s. Her day perks up, though, when Root visits for some “beauty tips.” Shaw grumbles about her new identity, but Root stresses the importance of laying low — and nudges her to check out some “Romeo” guy on her dating app.

* Reese is now Det. Riley, on the NYPD’s narcotics squad. After busting some kneecaps after wrapping a drug bust, he next is called to a crime scene tended to by Fusco — some gang banger found dead on a rooftop, alongside wire crimpers.

* And then there’s Harold Finch aka”Professor Harold Whistler,” who is resigned to his new destiny in academia, even if his thesis is riddled with typos.

The Machine summons Reese and Shaw to a self-help workshop, outside of which they get a call on a payphone, with the first new number in a while. Reese meets up with Finch, saying it’s time to return to work — but Harold is in no rush. As he observes, they’d been operating “at a loss” when comparing lives saved to lives ended during their run. Yet while Finch has lost faith, Reese believes in the “purpose” that tracking the numbers provides.

Keeping a low profile, Reese discovers that the number belongs to an electronics shop owner who’s in deep with a gang that enlisted him to fashion a non-tappable mobile network. When the gang kidnaps the POI’s son, Reese sets out to extract information the old-fashioned way, with a grenade launcher and such, but Shaw stops him before he makes too big a scene and exposes them all.

Meanwhile, Root pays non-believer Harold a visit, having discovered that “the Mayhem Twins” are back to chasing numbers. Deriding his indifference, she says, “You don’t get to sit this one out….You have to pick a side because this is war…. You have a god in this fight, and she’s fighting for her life.” Harold wonders what difference a few numbers could possibly make “in the face of such a struggle,” to which Root retorts, “All of this matters. We all matter.” So the least Harold can do is get his friends out of their current mess.

To that end, with the POI under the gun to finish the network, Finch — who knows “a bit” about wireless network architecture — helps him solve a “nodes” problem. In then surveying the POI’s set-up, he is fascinated to see that he’s invisibly bouncing the signal off old VHF antennas, which still sit atop many rooftops. After Finch furnishes Reese with the gang’s current base of operations — the site of a quarterly, massive drug deal — Elias’ goons, hired by Reese, arrive on the scene to make their own mayhem, while sniper Shaw keeps watch and Reese breaches the house to get the kid.

As the cops clean up the scene, the mysterious Martine — under the guise of “Homeland Security agent Meg Watkins” — asks around, scoffing at the idea that a “gang war” is responsible for the mess. Reese meanwhile meets up with Harold to hand off one of the gang’s untappable phones, which he’ll be distributing to the team as a means of communicating. We then see Shaw meet “Romeo,” who’s in need of a good wheel man, while Fusco is assigned a new partner: Det. Riley.

As the hour closes, Finch jots down the “errant” letters in his thesis — which was written by the Machine — and uses them to fetch a dusty old book at the library, one which leads him to an abandoned IRT subway station. Has Team Machine found their new “Batcave”?