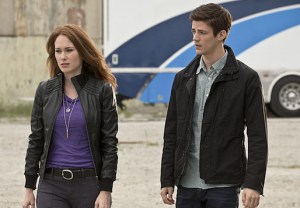 This Tuesday on The Flash (The CW, 8/7c), Barry and the S.T.A.R. Labs team meet Bette Sans Souci, a metahuman who is not innately villainous, but whose “explosive” talent is at risk of being weaponized by the very military she once served.

Explaining her character’s origin, Kelly Frye (Rake, The Mentalist) tells TVLine, “Bette was in Afghanistan defusing roadside bombs when an explosion left shrapnel inside her body.” The war vet was then transported back to the States… just as S.T.A.R. Labs’ particle accelerator began accidentally (?) going haywire. As a result, “The same explosion that caused The Flash to get his powers gave Bette her ability.”

Specifically, Bette can turn any object into a bomb just with her touch — a lesson Barry learns when she unintentionally sets his costume to combust, forcing the poor lad to strip down and be left buck naked (as seen in a promo). “That was pretty cool,” the actress recalls with a laugh. But lest you think Barry will add 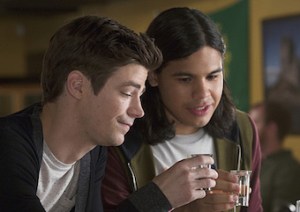 yet another crush to his list, it’s a different S.T.A.R. Labs superstar whose fuse is lit by the fiery newcomer. “There may be a little something between Cisco and me…,” Frye teases, adding that the tech whiz’s christening of her as “Plastique” is “a really cute part of the episode.”

When Barry & Co. first get wind of the volatile new metahuman in their midst, they of course fear the worst, only to realize that Bette wishes not to exploit her ability, let alone allow General Wade Eiling (played by Sleepy Hollow‘s Clancy Brown) use it for his black op squad’s nefarious purposes. “He is trying to get a hold of me, to use me as a weapon,” Frye shares. “He wants what I’ve got!” 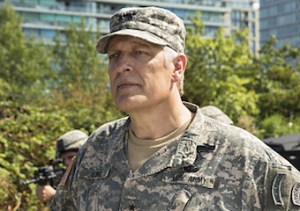 an actor of many and varied credits, among the highlights of her Flash experience. (“He’s super-cool, and such a presence,” she notes.) There was also some nifty underwater stunt work involved and, yes, most likely a Nicolas Cage-style “Walk Away from an Explosion in Slo-Mo” moment for her character. But the actress also found a certain honor in serving as somewhat of an avatar for Brooke Eikmeier, who penned the episode (with Aaron and Todd Helbing).

“Brooke is a strong female like Bette Sans Souci. And like Bette, she was in the army, as a cryptolinguistics specialist,” Frye reports. “I got her whole story while on set, and it’s pretty amazing.”

All told, Frye hails the freshman drama’s cast and crew as “so professional, so talented and so cool,” including but far from limited to Candice Patton, who like Frye hails from the Lone Star State. “It’s a really great group,” she says, “and I hope they get to do this show for a long time.”