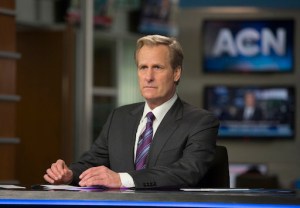 This Sunday, when HBO’s The Newsroom returns for a shortened final season (9/8c), Will McAvoy’s self-proclaimed “Mission to Civilize” begins the march toward its inevitable end.

While fans may lament that there are only six more episodes of Aaron Sorkin’s fictionalized cable-news drama left, at least one person is really OK with the saga reaching its conclusion.

And that person is star Jeff Daniels.

“Even though it was only three seasons, I was glad for it to be done, and I was glad to have done it,” Daniels says of the part that won him an Outstanding Lead Actor in a Drama Series Emmy in 2013.

Like pretty much any actor who’s ever been in an Aaron Sorkin series, Daniels cites Newsroom’s full-tilt pace and verbal saturation as the reasons he was happy to sign off as the caustic news anchor for the last time.

“It was a huge challenge, but it was also a hell of a lot of work for [Sorkin] — and for us. And at some point, you wonder if it’s going to deteriorate,” Daniels tells TVLine.

From its first episode, viewers either praised Newsroom’s impassioned examination of contemporary newsgathering or mocked its preachy indictment of the 24/7 news cycle. (The 2013-set third season, for example, sees the good and bad in topics like the Boston Marathon bombing and the existence of pay-for-clicks news sites.)

But Daniels doesn’t seem to put much stock in either opinion.

“Three seasons with Aaron is three more than I had before the show,” he says simply.

Read on as Daniels divulges whether he’ll pine for his acerbic alter ego, which Newsroom props now reside in his Michigan home and exactly how it feels when one is “Sorkinized.”

TVLINE | Will you miss Will?
Yeah, a little bit. I feel happier just not being him. Happiness was an acquired taste for him. Mac certainly helped. He had a lot of issues. A lot of issues. Insecurity, vanity, ego, too smart for the room — until Mac told him otherwise — and then he realized what an idiot he was. It was great fun to do, and I will miss the people. I will miss the family that was the cast and crew of The Newsroom.

TVLINE | After viewing the first three episodes of the season, it struck me how much calmer Will seems in general.
He’s happy! He’s got the love of his life back. He’s gotten over the betrayal thing, which he realized at the end of two was his problem. And now things are good. Sunshine, meadows of flowers for Will. [Laughs] But then, right off the bat in the first episode, [Mac] wants nine bridesmaids, which means he has to come up with nine friends. He doesn’t have nine people in his life that even like him. 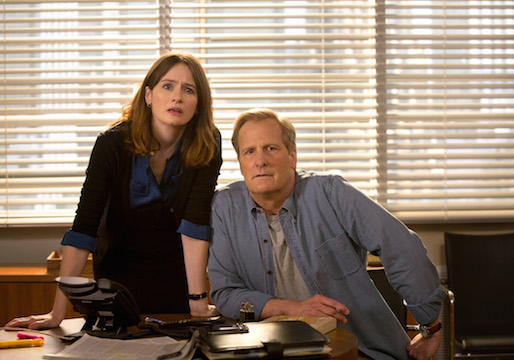 TVLINE | In the season premiere, ABC’s Diane Sawyer and NBC’s Brian Williams are mentioned as possible members of Will and Mac’s bridal party. Does that mean we’re going to see cameos by them at some point during the season?
No. [They’re] mentioned, but not seen.

TVLINE | You’ve got some great guest-stars this go-around: 2 Broke Girls’ Kat Dennings, The Office’s B.J. Novak and Paul Lieberstein. Any counsel you give people who are new to the Newsroom set?
From the acting end, it’s a challenge. The amount of dialogue and the speed and the pace at which these people say these things, and the challenge of making it look like its falling out of your head versus memorized and coming off a page. That’s hard. It’s kind of like: Only good actors need apply… It’s not like any other show. You can’t kind of wing it or work your way into it. Our little mantra on the show was, “Know it and know what you’re going to do with it at 6 in the morning.”

…I remember the first season, about Episode 5, I just — it was like I needed more memory in my hard drive. In the middle of a scene, I just took a knee in the middle of the newsroom and said, “What’s the line? What’s the line?” And the script supervisor yells it, and I can’t repeat it. She told me three times, and I couldn’t repeat it. And they said, “OK, Jeff. Why don’t you go home?” They gave me the afternoon off. and they said, “Just get some rest.” It became known around the cast. And everyone went through it: getting Sorkinized. It’s where you just hit a wall, and you can’t remember anything. And then you come back the next day, and you remember everything. We all, at some point, took a knee.

TVLINE | And Marcia Gay Harden is back as CAN’s legal counsel, Rebecca Halliday. You two, in particular, have a lot of verbal sparring at the beginning of the season.
She’s a joy. Marcia and I did God of Carnage together on Broadway. And that play was similar in speed and pace, and so it was great to be with a friend who knew how to do that kind of thing. We just fell right back in to being on Broadway together. It was great fun. 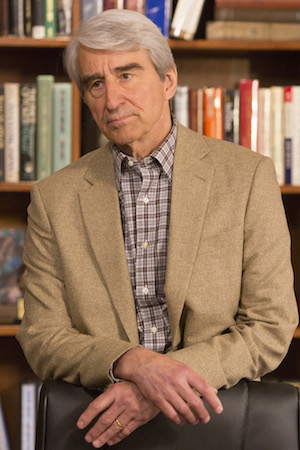 TVLINE | Without giving away a major plot, ACN finds itself in a really tough position very early in the season. Charlie is central to that storyline, but does Will come into it later?
It’s really Charlie’s show. Will’s aware. It’s really — without saying anything about what happens — it’s a great season for Sam Waterston. It really is. The second half, in particular. He’s got some incredible scenes that have to deal with that… B.J. [Novak, who also is involved in the storyline] did a great job. It was great fun. That’s what Aaron does a lot: He gets these very, very smart people and puts them in situations where we get knocked down. We get thrown off where we don’t know what to do, getting out-smarted. That’s fun to play.

TVLINE | After filming wrapped, did you keep anything from the set?
I did. A couple of pictures, but also I was able to get the chair in Will’s office. I’m very happy about that. That’s at home in Michigan

TVLINE | What were the pictures of?
I think there’s one Photoshopped of me and Obama.

TVLINE | One thing that has always bugged me was that we didn’t find out who wanted to kill Will in that death-threat storyline from Season 1.
Yeah, that kind of went away. That was a storyline that didn’t get picked back up. Aaron moved on to other things. I don’t know. I’m the king of justification. Between Season 1 and Season 2, they caught the guy. He went to jail. [Laughs] We just didn’t shoot those scenes.