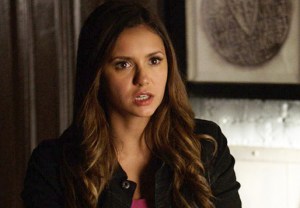 “What about Bonnie?” isn’t exactly the reaction Damon was hoping to get from Elena upon his return on Thursday’s Vampire Diaries. Her literally jumping out the window to avoid him was merely the icing on his three-layer cake of disappointment.

But because Elena’s always been a flip-flopper — it’s my favorite quality of hers, second only to her ability to make family members magically disappear — she decided she wanted Alaric to un-compel her into remembering her love for Damon. This would have been a solid plan, had a freak incident (see below) not stripped Alaric of his vampirism, and with it, the ability to jog Elena’s memory.

It looks like Damon’s going to have to win Elena’s heart back the old-fashioned way, and if it means more of these incredible drawings, I’m all in: 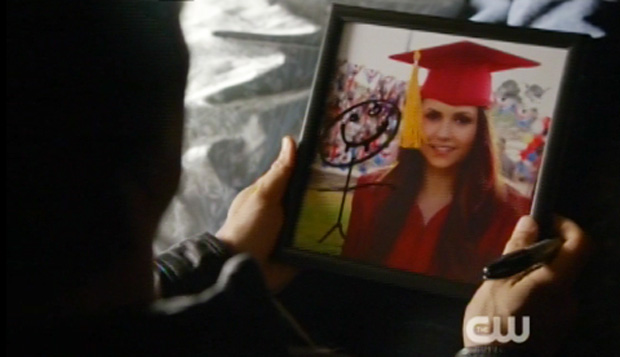 WITCHY WOMAN | There’s always been something off about Alaric’s new boo, and this week, Elena finally put her finger on it: Jo is a witch! To be fair, Elena didn’t exactly stumble upon this conclusion all by herself. “I know what Alaric is and I know what you are,” Jo told her point-blank after catching Elena checking her coffee for vervain. And while it seemed her bewitching nature would derail her relationship with Alaric, it might actually be the one thing keeping them together; she followed him during Operation: Save Damon (and Enzo) and kept him alive after a devastating attack. Unfortunately, because this all went down beyond the Mystic Falls border, Alaric is no longer an all-powerful vampire capable of compulsion. (Try getting into Harvard now, Warner!)

LITTLE ORPHAN SARAH | Speaking of new boos, Jeremy’s lady friend — or is she Matt‘s lady friend? — continued investigating her parents, now known to be Zach Salvatore and Gail Somethingstein. Matt delivered the comforting news that all of her remaining family members are bloodsucking monsters, but something tells me that won’t deter Sarah from sticking around for a bit. Anyone think they know what she’s really up to? Because I haven’t the foggiest.

FRIENDS 4NEVER | Raise your hand if you thought Stefan and Caroline’s big confrontation at the end of the episode was going to result in a kiss. … Oh, everyone? Well, it didn’t. “After all this, I don’t want to be friends anymore,” she told him, at which point she was supposed to say, “I want to be more.” But she didn’t say that. She didn’t say anything. She just stormed off into the night, leaving Stefan sad and alone once again. Could Steroline really be over before it even began?

#JEREMYPROBLEMS | And then there’s Jeremy, poor “hulky, broody” Jeremy. He’s always been an emotional wreck, but now that he’s accepting Bonnie’s gone forever — she’s not, by the way — he’s going H.A.M. on everyone and everything, especially his battered cell phone. That poor little guy never stood a chance. (Side note: If Jeremy doesn’t have Bonnie’s pin, how has he been paying her bill? Such mysteries, those phone companies…)

OK, let’s talk: Were you surprised by Jo’s reveal? Do you think Alaric will remain human forever? Were you hoping for an epic Steroline lip-lock? And how long will we have to wait for Damon and Elena to get back together? We’ve got a million things to discuss, so drop a comment below and start talking!