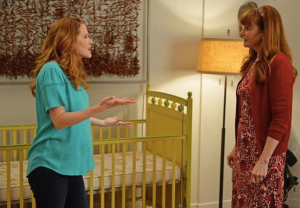 As if you weren’t already looking forward to spending time with your family this holiday season! In this week’s Grey’s Anatomy, Derek made the grievous error of suggesting that Mer invite her newly discovered half sister over for dinner – and her newly discovered half sister’s estranged father – and April tried to appear enthusiastic about her mother’s arrival for a visit. The hour’s titled “Don’t Let’s Start,” but what the heck? Let’s!

GUESS WHO’S COMING TO DINNER | Those of us who thought that at last Mer was thawing toward Maggie, it turned out, thought wrong. In fact, early on in the hour, Derek was surprised to find out that his wife still had her semi-sibling calling her Dr. Grey. But perhaps he went a smidgen too far in his attempt to facilitate their bonding by pushing for not only the three of them to break bread together (which Mer went along with) but the three of them and Richard. He then made matters worse by pointing out that family was one of the reasons that Mer wanted to stay in Seattle. (It’s a wonder she didn’t get a concussion, she hit the roof so hard!) By the time he tried to call a time-out, it was almost too late — Mer was livid that he’d again brought up the D.C. job that he sacrificed for her. (Also of note: She mentioned that the president he’d been working for was Obama. So, not Fitz, then?)

In the end, Mer finally relented. At which point, Maggie balked at being set up to connect with her father, and Richard looked for any excuse to back out. But Derek refused to let any of them bail, which maybe he shouldn’t have. Why? Because when Maggie and Richard arrived for supper, their hosts were nowhere to be found – Mer had called a time-out of her own (to take a shower), and Derek had thought the idea sounded so good that he joined her. Richard seized the opportunity to apologize to Maggie for not having been a good father to her – or a father at all – and she reiterated that she hadn’t needed him to be a good father, she’d just needed him to be honest with her about their relation when they met. “I didn’t know what to do,” he said, “and I’ll never be anything but sorry for that.” Regardless, by the time Derek had toweled off, Maggie had left.

THE MOTHER LODE | Meanwhile, April and her mother made a lot of high-pitched noises to indicate how excited they were to have a chance to visit. But, since the ER was a madhouse, April couldn’t play hooky to actually hang out. Jackson, on the other hand, had a light schedule, so he jumped in and offered to spend the afternoon with his mother-in-law. But, once April learned that her mom and husband had been talking without her knowing it, she had a hissy fit and rejected all of her mom’s efforts to help out with the nursery, dinner, you name it. Later, Jackson calmed April down by explaining that, while she doesn’t need any guidance to become a parent, he does, so he welcomes her mother’s advice. It also helped that, in demanding an apology from April, her mom explained that seeing her daughter not only live so different a life but thrive in it was scary for her – and made her darn proud. Like that wasn’t enough, she added that, as a grandma and April’s mother, it is her right to pitch in and lend a hand if and when she can. Crisis averted.

DR. FEEL-BAD | Off Arizona and Callie’s break-up last week, the latter learned that the former – even though nobody kicked her out of the house – was crashing at Grey Sloan. Not that she had a lotta time to crash, anyway. Herman continued to run her ragged (and in such a withering way that she always let Arizona know that she doubted her ability/dedication/you-name-it). What’s more, Herman bailed on a meeting at which she was supposed to go over a complicated procedure with Arizona. Why? “I said it’s personal,” Herman snapped. (Sorry!) The following day, Arizona was nailing the procedure in the OR but explained what she was doing in her own way, and that just didn’t fly. “I want my exact words,” Herman barked. “You’re giving me the gist.” Even Alex, who was observing, was like, “Chill, lady.” That evening, Arizona took Alex’s advice and told her mentor that she wouldn’t be talked to in that manner for the next year. That’s right, you won’t be, Herman replied. “I’ll be dead in six months.” So the choice was Arizona’s: Would she tell the board that Herman was dying of an inoperable brain tumor or keep her secret and try to absorb a year’s worth of groundbreaking medical know-how in half that time?

STITCHES IN TIME | In other plots, Bailey’s discovery of a tumor in the esophagus of a patient with poor eating habits made her rethink her own lifestyle. (Her subsequent attempt at jogging was so funny, it called to mind AbFab’s Edina.) In the end, she became so convinced that she was dying, she vowed to change her ways, stat. In the story on which Shonda Rhimes and First Lady Michelle Obama put their heads together, Owen took a special interest in the case of a homeless veteran who lost everything she owned when she was carjacked. Though the patient didn’t think she deserved the help of an assistance program for veterans since she only fixed computers in the green zone in Iraq, Owen reassured her that she did. In turn, Jo saw herself in the veteran and realized that she didn’t have a home, she only had Alex’s home. But all he had to do to reassure his girlfriend was basically tell her that his casa was her casa.

OK, your turn. What did you think of the episode? Were you surprised to learn that Herman was going to go the way of Masters of Sex’s Lillian DePaul (RIP)? Sorry we didn’t get the Mer/Der/Richard/Maggie dinner we were promised? Hit the comments!