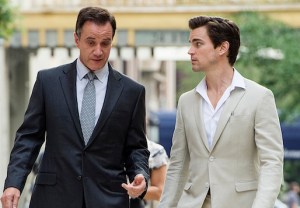 White Collar has saved the best and baddest criminals for its last, grand con.

The USA Network drama’s final season (premiering Thursday at 9/8c) finds Neal and Peter — not to mention, all their loved ones — in harm’s way as they aim to take down the world’s most infamous and threatening group of thieves, the Pink Panthers.

But before the unforgiving Panthers took center stage as the Big Bad for the show’s swan song, Neal was in danger of being attacked by… his ex-girlfriends? ‘Tis true! Here, series creator Jeff Eastin previews Season 6’s familiar villains and dangerous new enemies and teases the storylines that almost were.

TVLINE | How would you sum up White Collar’s farewell season? What do you want fans to know going into it?
I think we had a really good ride. Instead of looking at it like six episodes, we decided to look at it as a little miniseries. We wanted to bring back a lot of the bad guys that I, personally, loved, with Keller (played by Ross McCall) and Hagen (Mark Sheppard). We just wanted to make this last season a real tribute to the show and, hopefully, make it enjoyable to the fans who have really stuck with us through all these years.

TVLINE | What can you say about the Pink Panthers plot that carries you through this last run?
The Pink Panthers are actually based on a real group. We’d actually toyed with this idea earlier in the run of the show. We thought it would be a really cool way to put Neal up against bad guys who were his equal. The thing about the Panthers that will figure heavily into the end of the series will be that these guys never, ever forget a slight. So if you double-cross them, they go after you and they go after everybody you know about or have ever met and/or are related to. So that’s the other big part of it, that these guys are probably the most dangerous group that Peter and Neal have ever gone up against.

TVLINE | Is this one of those plots, because of how infamous the Pink Panthers are, that you couldn’t really do until you reached the climax of the series?
You never know quite how long the show’s going to go, and the Panthers are one that we really thought, like you said, would be a fun group that we can have our guys go up against once we’ve exhausted the other villains in the show. Once we realized this was the last season, we said, “Alright. Let’s do it. Let’s pull them out and go for it.”

TVLINE | How are Peter and Elizabeth handling the long distance relationship?
I was just talking to somebody about this the other day. We were debating how on Graceland the relationships are completely different than the ones on White Collar. I was really surprised that Peter and Elizabeth became this really almost perfect TV couple, that they were there for each other, because they didn’t have the crazy drama that a lot of television couples have. People did react well to it, and so ultimately we started evolving in that direction… Let’s put it this way: the Burkes don’t handle their separation well, so they move pretty quickly to solve that problem.

TVLINE | You have a lot going on in this final season and it’s only six episodes, but is there room for romance or love for Neal?
There is not a great deal of room. [Laughs] Honestly, that again was by design. What we wanted to do in this final season was make it about our guys, really focus on that core group, which is Peter, Neal and Mozzie. So we backed off Neal’s usual romantic entanglements this year and decided to [focus] on his relationships with Peter and Mozzie. 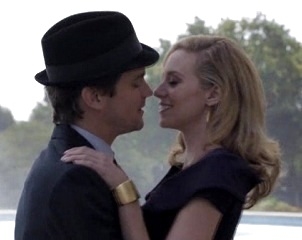 TVLINE | Does that mean we won’t be hearing of or seeing any more of Sara (played by Hilarie Burton)?
I don’t believe we see Sara this year.

TVLINE | What about the other woman from Neal’s past, Alex (Gloria Votsis)? Is that somebody who you might check in with, since she is a thief herself?
Honestly, we debated quite a bit on it. In one incarnation, we had Neal going up against the entire group of women. [Laughs] We were going to have Kate, Alex and Sara combine forces against Neal, but ultimately, we decided to focus on the three guys. So we don’t get to check back with Alex either.

TVLINE | Were they out for revenge for broken hearts? Or was this like a criminal type of thing where they were plotting something?
It was a little bit of broken hearts. [Laughs] That was a bit of the idea. When we were diving in early, trying to figure out what we wanted to do with this season, that was one idea that came up. Ultimately, we didn’t think they would get along that well.

TVLINE | Were there any other plot points you wanted to include but just didn’t have room for?
Oh, yeah. I mean, there was a million of them, honestly. It was funny because the first year of White Collar – I think it was around Episode 10 – I remember sitting there with Joe Henderson, Jim Campolongo, Channing [Powell] and a lot of the writers, and we just said, “My God, we’re out of stories. There’s nothing else we can possibly do.” There was a bad week there, and we came back and suddenly we realized we can tell these stories until the end of time once we sort of figured it out. The one I really regret not doing was going to be Keller’s death. Ross McCall’s always done a great job playing Keller, and the idea was that he was going to come in and say that somebody poisoned him. He was going to die within 48 hours and wanted Peter and Neal to help him solve his own murder. At the end of the day, Keller was going to give Neal some big piece of information right before he died. That was one we really, really wanted to do. You’ll see how the finale plays out this year — Keller’s involved. But ultimately, that was one I’ll always regret not doing.

TVLINE | Does the finale leave the door open for a TV-movie some day?
I can’t say. Let’s put it this way: there’s always a possibly of doing a prequel. So, sure.