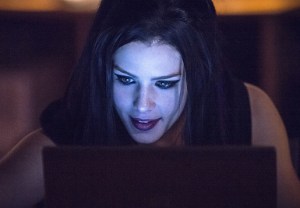 The CW’s Arrow this Wednesday finally shed light on Felicity Smoak’s past, which (in several ways) was darker than we perhaps imagined. Also: Sara’s killer revealed?!

Following a fun montage of training sessions — Oliver vs. Roy, Thea vs. Malcolm, Laurel vs. Ted — we see how “normal people” spend their mornings, as embodied by Felicity, whose toothbrushing is interrupted by a visit from, first, boss man Ray Palmer, and then her mother, Donna, who’s flown in from out-of-town.

But just as Felicity and her mom begin catching up, a power outage darkens Starling City, courtesy of some entity known as Brother Eye. Once Felicity gets opportunity to poke around the hacktivist’s code, she realizes that the super-virus in play is one that she created five years ago at college. (As a budding hacktivist, she tells Oliver, “It was my first attempt at being a hero.”) At the time, her beau Cooper used the virus to wipe out some people’s student loans, which promptly earned him a visit from the FBI. Cooper claimed authorship of the virus, to save his love from time in the pen.

Realizing her unwitting hand in Starling City’s latest crisis, Felicity can only imagine that Cooper’s old roommate Myron is responsible, but when Oliver puts an arrow into his PC, he pleads innocence. Later, while sorting through some complicated, long-simmering mother/daughter issues — Donna laments that there is nothing of her in Felicity, only her father — Felicity realizes that her mother was duped into visiting Starling. And at that instant, goons come barging in to grab the women.

Transported to a warehouse, Felicity realizes that her ex, Cooper, did not die in prison but had his death faked by the NSA, who were after his skills. And now Coop is disgusted with Felicity, whom he believes to be a Big Corporation troll like the ones they used to target. He tasks Felicity with hacking the GPS for some armored cars en route to a Starling bank, which she ably does. But with Cooper out of the room, Felicity uses the wi-fi on the “smart wearable” that Ray gifted Donna with to sneak out an SOS to Team Arrow. Soon enough, Oliver, Roy and Diggle arrive to thwart the heist, while it is Felicity herself who wrests the gun from Cooper and pistol-whips him with it. Later, Felicity assures Donna that there is some of her mother in her — a toughness that she has come to rely on in recent years.

* Oliver is aghast to discover that Thea has purchased a “sweet loft” with money from Malcolm’s estate. Thea encourages Oliver to meet her halfway as they attempt to mend the fractured Queen family, which he does at episode’s end, coming over for popcorn and a movie. Thea invites Oliver to share the loft with her, and Malcolm watches from afar as the two bond.

* Laurel is appointed “acting D.A.” during the cyber attack and promptly uses her authority to send a riot squad to respond to a bank skirmish — escalating the conflict in doing so. Quentin chastises her afterward, then notes a darkness and distance in her in recent weeks. If not to him, she should talk to someone, he advises — and at hour’s end, Laurel confides in Ted the pain she feels over her sister’s “secret” death. After counseling Laurel that her sister’s killer is a target she will never be able to strike, Ted says he now is able to train her.

* The big “twist” (and I use quotes, because I have to assume it’s some sort of gaslighting/brainwashing ploy) comes in the final scene, when a sleeping Roy is awoken by visions of Sara dying on that rooftop… at his hand. But again, I am calling shenanigans!

ARROW POINTS:
* “What’s the one thing Queen Consolidated has that we don’t use to its full potential?” “A doorbell?”
* “She’ll probably be really busy… planning my funeral after I die of embarrassment.”
* “How many billionaires do you know?”
* “I’m sorry that don’t dress like a porn star, which I realize is a compliment to you.”
* “If I had two less IQ points, we would have never gotten in this mess.”
* Oliver talking about how the past shaped who Felicity has become, “and we know how I feel about her.”
* Can we please get Diggle a better crimefighting disguise than a stock ski mask?
* Does Malcolm have Thea on a sick abdominal workout or what?
* Have we ever thought about how much easier it’d be for Oliver to retrieve his costume off a hanger or hook? Is having to stop to undress a mannequin really the best idea? (Ever try that in a department store? Not easy.)

What did you think of “The Secret Origin of Felicity Smoak”? Did you want that opening Felicity/Ray/Mom scene to go on forever? Was Charlotte Ross not highly entertaining as a whole?