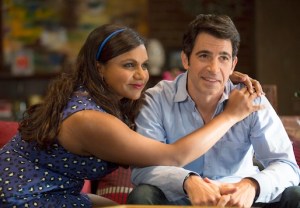 Good things are worth waiting for, but c’mon Mindy!

This week’s Mindy Project finds Danny unbearably irked by his girlfriend’s chronic lateness. In the show’s fashion, his being bothered is depicted as funny, then sad, then sweet — and, as usual, it somehow works.

Plus, Chris Messina runs and moonwalks during the half hour, Mindy Kaling rocks Staten Island hair and Allison Tolman is as at home on Mindy as she was on Fargo, so it’s a good time all around.

Let’s take a look at what happens in “Caramel Princess Time.”

I KNOW IT WAS YOU, MINDY. YOU BROKE MY HEART. YOU BROKE MY HEART! | Mindy’s late arrival to a showing of The Godfather II — “the movie that raised me,” Danny says — as well as her inability to show up to work on time works Danny into a lather. He doesn’t buy her argument that it’s what Tamra calls “caramel princess time” and what Mindy says is “part of my spontaneous and fun deal, Danny. You have to take the bad with the good.” So he tries to teach her a lesson by ditching her at a night of Italian-American stand-up comedy.

But Mindy gets him back by messing with his watch and almost making him late for work — which he rectifies by sprinting to Shulman & Associates and arriving a minute early… sweaty and gloating. “Take a hike! Boom!” he yells to everyone before moonwalking into hospital chief Dr. Fishman. (Side note: Messina’s face makes me think that he broke several times — or desperately wanted to— while shooting this scene.)

THANKS FOR SHARING | She’s there because she wants him to attend a hospital seminar on emotional health; remember, the last time she saw him, she was under the impression that he was suicidal because Mindy kissed her. Fishman revokes Danny’s hospital privileges until he completes the course, taught by (of course) Brendan Deslaurier. The midwife eagerly greets his new attendee, happy for “the day I can finally fix you!”

So while Mindy takes Annette and Dot on their Saturday errands in his stead, Danny attends the touchy-feely group therapy session and winds up confronting the reason he hates Mindy’s lateness: His father once never showed for a planned (and sold-out) viewing of Ghostbusters, so a traumatized Danny wound up having to buy a ticket for Amadeus instead. (Kudos to Messina, once more, for conveying a very touching moment amidst all of the zaniness.)

Meanwhile, Mindy’s had a hell of a day trying to herd Annette and Dot from the beauty parlor (where Mindy herself tries out some very big hair) to the doctor’s office for a mammogram and then back home. Danny finds her on his mother’s porch, and they apologize for being a little beastly to each other.

“I like you on a Staten Island porch,” he says. “I would rather die,” she responds.

WHO SAYS ROMANCE NOVELS ARE DEAD? | Tamra sets Peter up with her friend, Abby. Tamra says her pal is basically her “twin,” so Peter’s surprised when he arrives at the restaurant and sees Tolman. Unfortunately, he’s unable to get past the superficial, so he ditches Abby with a lame excuse that she totally calls out as being ripped from the plot of Look Who’s Talking. Ugh, Peter. How many times do we have to watch you be that guy?

Tamra takes him to task the next day at work and shames him into attending one of Abby’s book signings to apologize. “What are you gonna be doing? Eating pretzels of the floor? Yeah, I saw it,” she shouts. (Ha!) So he does, realizing in the process that Abby is pretty awesome and her books are crazy sexy cool. But she’s over him, so he writes his own romance novel — A Titanic Mistake: A Sunken Romance — and reads it to her at a writing group, earning himself a second chance.

Now it’s your turn. What did you think of the episode? What was your favorite line? Sound off in the comments!