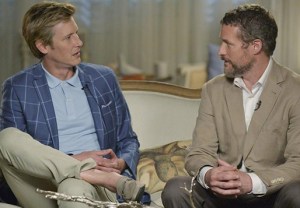 David Clarke’s long-awaited TV interview on Sunday’s Revenge was so unexpectedly brutal, it made Oprah’s confrontation with that Million Little Pieces author look like a warm hug.

“I just love live TV,” Nolan smugly remarked to Victoria before the interview began. “You never know what’s going to happen.” Of course, he never could have predicted that David would pull him in front of the camera to publicly accuse him of cheating “Amanda” out of her hundreds of millions. “She died without knowing that you betrayed her, that you betrayed me, and for that, I will never forgive you,” David promised. Ouch!

The second round of David’s (literal) one-two punch came during his post-interview visit to Nolan’s house. It began with the usual tense chit-chat — Where’s the money? Why’d you let my daughter die? Blah, blah, blah — then took an uncomfortably physical turn when Nolan referred to David as a “father,” which earned him a direct hit to the money maker. Right on cue, Emily arrived at Chez Ross, just in time to devour a steaming fresh plate of guilt: “Your lie finally caught up to me.” Ouch x2!

So where had Emily been while her father was beating Nolan, both physically and televisually? Why, doing some super sleuthing, of course! She visited the silo prison Conrad supposedly built for David, and while most things checked out, there was a strange absence of rust — yes, rust! — around the bottom of the bed, leading Emily to deduce that her father made the whole thing up. (Thank God Emily is also an expert on weather and infrastructure, otherwise this revelation could have taken weeks.)

But you want to know the worst part about this whole thing? David still hasn’t tamed that insane Jumanji beard he’s got going on. Does Margaux’s news channel not have a hair-and-makeup team?

HOW TO GET AWAY WITH MURDER | Charlotte Grayson’s night out with that tattoo’d fella ended about as well as it began: with her covered in blood, and him lying dead on the floor of a seedy apartment. Naturally, she called the prettiest little liar she knows, and just as anticipated, Emily instantly concocted a fool-proof cover story to exonerate her burden of a sister. But because Charlotte can’t just shut up and be grateful, she seized the opportunity to accuse Emily of also killing Aiden — oh no, she didn’t — forcing Emily to come out with the truth about Victoria’s hand in his death. This led Charlotte to the long-overdue decision to check herself into rehab, though not before telling Daniel a secret about Emily. (As for which secret, we’ll just have to wait and see, won’t we?)

LITTLE RED CRAZY HOOD | Am I the only one loving how insane Louise is becoming? Despite spending all her time with Daniel, the “southern” beauty is clearly gunning for Mama Grayson. She even crashed Victoria’s lunch date with Margaux, assuming Vicky would welcome her with open arms as one of the family — more specifically, one of “MY OWN BLOOD!!!” — but her hopes were dashed when Victoria (accurately) dismissed her as an obsessed lunatic. After exhausting her shot with both Daniel and Victoria, Louise moved onto a more French target, but what exactly she has planned for Margaux is still anyone’s guess.

BEN STILL WANTS TO BE A DETECTIVE | Jack’s partner continued to stick his beautiful nose where it doesn’t belong this week, looking further into the conspiracy surrounding Conrad’s murder. The sudden “heart attack” of an officer involved with the investigation only fueled his suspicions, leading him to discover the double infinity symbol in said officer’s basement. While Jack had previously planned to distance himself from Ben — he was making Jack look bad, to be honest — it’s now in his (and Emily’s) best interest for him to stay as close to the former Client List-er as possible… especially if it means more locker-room scenes for us. (Sorry, not sorry.)

Revenge-rs, are you excited for Emily and David’s long-awaited reunion, which is finally happening next week? Drop a comment with your thoughts on that, and your review of this week’s episode, below.