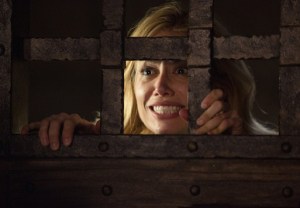 Claire Coffee has a habit, every time she receives a new Grimm script, of taking note of Adalind’s trajectory over the course of the hour.

“I usually map it out a little bit, emotionally, to see where I’m starting and where I’m going,” she tells TVLine, adding with a chuckle, “The end of last season and the beginning of this season, it’s like, how low can it go?!”

That’s a hypothetical that Coffee may not want to ask, given that this week’s episode finds her Hexenbiest alter ego locked up in a dungeon, and next week’s — we’ve seen it — doesn’t really improve upon the situation. Meanwhile, little Diana is out there in the world without her Wesen mommy…

“I keep thinking all the Adalind haters are going to be super-excited at what transpires at the beginning of the season,” Coffee says, laughing.

Read on as the actress offers behind-the-scenes scoop on Friday’s episode and previews what’s ahead for the screwed Ms. Schade.

TVLINE | Watching Adalind so readily believe the Royals seems to show a vulnerability she hasn’t had before. Have you consciously changed playing her that way since she became a mom?
Actually, that’s a really good point that I hadn’t even thought of. Why does she just believe them, right off that bat? I’m working with her desperation, which was a new element after the birth. She never had anything to lose before. Now, it’s really the ultimate thing that someone can lose, which is their child. It’s definitely coming from a different place. [There’s also] a real focus. Getting this baby back is the most important thing, and she is not thinking about the repercussions of what she’s doing or any of the consequences. It’s a real laser focus.

TVLINE | How close were the rats to you in the dungeon scene?
They were in my hair and on my neck. [Laughs] And elsewhere. Our producers sent me an email that said, “You’re good with rats, right?” And my response was, “I lived in New York, so I am familiar.” But then you get there and it’s like, Oh, this is rats on me and around me. They were trained rats and clean rats, but still: rats.

TVLINE | I love that Adalind could not have worn less dungeon-friendly clothes into her current predicament. I think your coat is a cream color?
Yes, my fur coat. Which, at the end of the season last year, wardrobe had no clue that we were going to have to carry these pieces through six episodes, so one of our seamstresses was making all of these Diane Von Furstenberg flowy shirts by hand… Luckily, they changed my boots, so I have a little bit more sensible shoes.

TVLINE | We find out while she’s there that she and Nick can see through each other’s eyes.
It links them in a way that’s going to be explosive come Episode 8. It resolves itself in quite a treacherous way and it has massive implications for a couple of the characters.

TVLINE | We meet Renard’s mom in the first few episodes of the season. It seems like she’d be a worthy adversary for Adalind.
It seems that in the Hexenbiest community, they’re a very gossipy bunch. Everybody knows about everybody else. So everybody’s aware of everyone else’s station on the playground and their hierarchy. [Laughs] It does appear that she’s pretty high up there on the mean girls, Hexenbiest food chain.

TVLINE | What’s Adalind’s relationship with Renard like this season?
Of course, it’s complicated. She doesn’t even know that he’s on his deathbed. She finds out about that in Vienna from Victor. The biggest problem is that he’s given this child away to Kelly. [Adalind] doesn’t know that. And when she finds that out, it’s going to be really difficult, obviously, for her to forgive him. I think she won’t understand why.

TVLINE | Chances of Adalind and Diana reuniting this season?
Good question! [Laughs] I think it’s about 50-50 right now. There’s a real s—tstorm that we’re working with this season. I have a feeling, Episode 18 or so is usually where I’m back in Portland and causing trouble again.