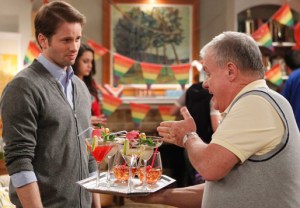 Thursday’s series premiere introduced viewers to the titular family, a six-piece ensemble of basketball-obsessed lunatics — save for gay son Ronny (the impossibly likable Tyler Ritter), who couldn’t shoot a basket to save his life. Even though he does in the premiere. Twice.

Feeling stifled by his overbearing family, Ronny decides to accept a new job and move to that “god-forsaken wasteland of a city” known as Providence, R.I., famous for its vibrant gay community. (“Aren’t all gay communities ‘vibrant,'” asks Joey McIntyre’s Gerard, exemplifying how The McCarthys‘ humor plays off the characters’ ignorance, rather than the writers’.)

Ronny’s mom (sitcom queen Laurie Metcalf) does her part to keep Ronny at home, revealing her doctor has found “something” wrong with her, though it doesn’t take a studio audience to see that she’s clearly crafted this mystery disease herself. 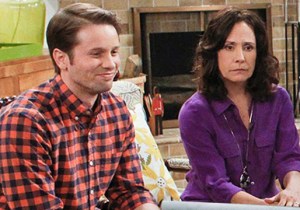 Speaking of Mama McCarthy, it should be noted that the sitcom’s greatest strength is in the interactions between Metcalf and Ritter, whose mother-son bond is as unnerving as it is hysterical. Nary a Good Wife nor Kira Sedgwick joke falls flat in the premiere — and there are many.

But it’s ultimately sister Jackie’s surprise pregnancy that inspires Ronny to stay put, accepting a job as the assistant coach of his father’s high school basketball team. (“I’m sure I’m not the first gay man whose father used him to try to recruit a basketball player whose mother is a lesbian,” Ronny muses.)

Your thoughts on The McCarthys? Grade the new sitcom below, then drop a comment with your full review.