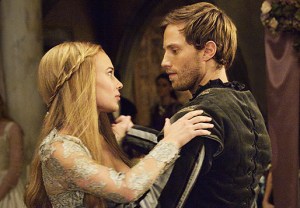 Greer’s wedding day has  already arrived on Thursday’s Reign (The CW, 9/8c) which means time is running out for Leith to stop her unholy union to Lord Castleroy. So the question is: Will he speak now?

Unfortunately, actor Jonathan Keltz is forever holding his peace about tonight’s nuptials, though he’s already hinted that the wedding might not go down as expected.

TVLINE | I’ve got to say, I’m not thrilled about the way Greer and Leith’s relationship has progressed.
[Laughs] There have been some hiccups. It’s been a bumpy road of love, that’s for sure.

TVLINE | Am I foolish for holding out hope this week, that he might stop her wedding?
This episode finds a lot of their relationship drama come to a head. The dynamic between [Leith, Greer and Castleroy] is very tricky. Is Greer going to follow her heart and go with Leith, or is she going to stick with security — not just for herself, but also for her family? Or is it possible, as she claimed in the last episode, to have that love and passion with Castleroy? Or is it something she’s just forcing herself to feel?

TVLINE | That’s so many possibilities.
I mean, at this point, Leith is pretty exhausted. 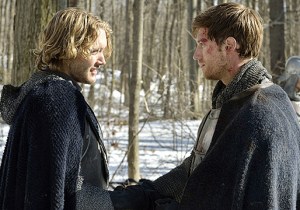 TVLINE | And there’s more than just feelings to consider; there’s also that whole political/religious mess, right?
Yes, and what happens in this episode is a huge catalyst for the rest of the season. This launches the tension between the Protestants and the Catholics. There’s a violent beginning, and you’ll see what that means and what that says about how Francis is going to be as a king and how his subjects are going to feel about the nobles. Who’s going to side with whom? Leith, Greer and Castleroy find themselves in the middle of all of that.

TVLINE | Let’s say Leith fails, and Greer marries Castleroy, what’s next for him? Who is Leith outside of that relationship?
It is true that my character’s journey has always revolved around Greer, and regardless of anything, we’re all going to stay at the castle. Although there is a massive circle of people we’re running in, [Leith and Greer’s] paths will continue to cross. There’s no way they won’t. I’m now working with Bash … and I’m a hand of the king, so I’m by Francis’ side and she’s by Mary’s side. No matter what, we will always have to be with each other, always on opposite sides of the dance floor.

Reign fans, are you crossing your fingers for a full-on wedding interruption? Or are you already mourning Greith in your own way? Browse photos from upcoming episodes below, then drop a comment with your hopes.