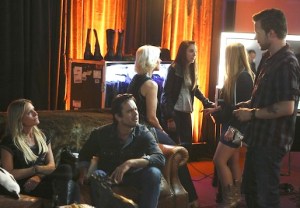 Luke, when you next have some downtime on that big jet of yours, I’ve got a book for you to read: It’s called She’s Just Not That Into You (or Your Global Brand, Whatever the Hell That Means).

I know you’re probably too busy memorizing scripts for your next foot-fungus-spray commercial — “Luke Wheeler’s FunkAway, for when your tootsies are funkier than a yardbird in a port-a-john ” — so I’ll give you a quick summary. If your fiancée suddenly grows an aversion to being linked to you in print, online and/or via broadcast… if she takes pains to make sure you won’t participate in a large public appearance… if she cringes whenever someone mentions your couple nickname, “Ruke”… if she gives her ex the first genuinely warm smile we’ve seen on her face in weeks… she’s just not that into you or your global brand or your stupid cowboy hat.

Those who can’t stand Nashville’s Mr. Wheeler and his engagement to Rayna Jaymes likely will take heart at this week’s episode, which finds a rift growing between the affianced CMA Award nominees. The couple’s not done by the end of the hour, far from it, but the cracks have started.

Speaking of flawed relationships, Avery and Juliette have multiple discussions about their spawn, Layla gets stinking drunk to deal with life as Mrs. Lexington, and Gunnar guilts his former flame into sticking around for a while. (That whole situation remains fishy, but we’ll handle it in a few.)

Read on for what happened in “Nobody Said It Would Be Easy.”

LET ME CATCH MY BREATH | Let’s deal with Juliette first, given that she’s the only character left in mortal peril after last week’s episode. (Spoiler alert: She lives.) Ms. Barnes is rushed to the hospital, where the doctor informs her that she’s got a condition that makes her prone to blood clots — one in her leg shot to her lungs, which created the symptoms she experienced onstage — and so she’s got to cancel her tour and head home to Nashville.

Thanks to a phone call from Zoey, Avery drives all night and shows up at Juliette’s bedside in Cincinnati … moments before Noah arrives. Thinking that Ju has moved on, Avery takes off in a slick-headed huff. Funny story: Noah thinks Juliette has moved on, too, and makes a play to be her fill-in baby daddy. She thanks him but gently turns him down.

Once she’s released, Juliette finds Avery in Zoey’s room — her firing of the upstart back-up singer is both classic Ju and hella efficient — and gives him two choices: He’s either going to be an all-in dad or have no role in the kid’s life. (Side note: Why is this scene 10 nanoseconds long? I could watch Hayden Panettiere and Jonathan Jackson act together for days, and given the weighty nature of their discussion, more than a blip would’ve been nice.)

Later, Avery arrives at Juliette’s to tell her that he wants neither option: Though he’s forgiven her, he can’t trust her, and she doesn’t get to tell him whether or not he can be a daddy to their baby. So a resolute Juliette holds a press conference to announce that she’s ending her tour, she’s pregnant, and Avery is the pop. “And that’s all I’m gonna say,” she declares, walking away in slo-mo. Oh Juliette, anytime you end the episode in a strut, I know you’re gonna be OK.

SOLO, YOU CAN’T GET OVER IT | Let’s move on to Rayna, who is happy about her multiple CMA Award nominations — including Entertainer of the Year, for which Luke also got a nom — but bummed that some people online and on TV mention that her engagement to Luke helped them both garner so many nods. I’m often surprised by how aghast Rayna seems when her name is raised in the media, and this episode is no different: Can you really become the reigning Queen of Country Music by caring what some yahoo on Twitter says about your career? (Though I did love the little detail of Sadie falling down the Twitter rabbit hole, given how passionately Laura Benanti embraces the Twittersphere.)

Anyway, Rayna is determined to prove that she deserves all of the accolades on her own merit, so she begins a plan to get her name on those trophies. First step: Crowd Luke out of a joint appearance on Dancing With the Stars, a proposition to which the DWTS powers that be are at first unreceptive. They need an act that’s “promotable,” Rayna is told, because God forbid that show should feature someone whom most of the population has never (Bethany Mota) heard of (Bethany Mota) before (Bethany Mota). So Rayna lies and says she has a bonus single she’s willing to debut on their broadcast, provided she can perform solo. DWTS dude is sold!

Luke is less excited when Rayna later tells him about her wrangling, but they good-naturedly agree to wage solo campaigns for the CMAs. This, of course, will fall apart in the coming weeks, but let’s distract ourselves from that by staring at Connie Britton as Rayna rolls out of bed. Beyonce, you taking notes? Because Rayna really did wake up like this.

PARTY FOUL | Elsewhere on Rayna and Luke’s schedule this week: Fly back to Nashville to deal with the fallout from Teddy skinny-dipping with a hooker. OK, that’s a bit of an oversimplification. Jeff invites Teddy to a double-date dinner at his place with Brianna and Natasha, the two ladies we met briefly last week. (Side note: When Jeff said their names, I definitely thought, “Those are stripper names.” Not on their own, but said together like that? Definitely. Close enough, eh?) Teddy leaves Maddie in charge of Daphne, which is not an egregious parenting misstep, methinks. Or, it wouldn’t have been, if Maddie’s hanging out with Cole and his friends didn’t turn into a house party at the Jaymes estate.

So while Teddy doffs his clothes and hops into the pool with ol’ leopard panties, Daphne freaks out — Scarlett-style — and calls the cops, who shut the party down. Unfortunately, this does not happen before Maddie makes an awkward move to kiss her future stepbrother. Pretty soon, Teddy, Luke, Deacon and Rayna all arrive at the house to read Maddie a very measured riot act, and the teen surprises me by taking her lumps like an adult. Oh, and Daphne and Maddie are getting a nanny. Did I mention that Leopard Panties is an escort? And that, despite his horror when Jeff tells him that fact, Teddy calls her again at the end of the episode?

GUNNAR AND HIS SONNAR | Gunnar’s ex, Kiley, doesn’t want him to have a relationship with their son. In the comments of last week’s recap, many of you theorized that Micah is really Jason’s kid, and I really hope that’s the case. Otherwise, this storyline is too similar to what’s going on in Avery-and-Juliette-land, right? Gunnar confides in Scarlett, who encourages him to get to know the boy, and I’m reminded how much I like Scar when she’s doling out straight-talk advice for other people. It’s just when she’s wrapped up in her own mess that she makes me nuts.

So Gunnar finagles a sleepover with Micah, who apparently has no qualms about spending the night at the house of man he just met. They get along famously, and emboldened by that fact, Gunnar talks Kiley into staying in town a while longer. Of course, the moment they embrace is the exact moment Zoey returns from the tour. Zoey, why not follow a move that worked for you the other night and just push Kiley out of the way, then act like you were meant to be there all along? (Too soon?)

BLACK MASCARA TEARS | Layla has taken to drinking hard alcohol to deal with the fact that Will likes dudes. This manifests as her being morose and screamy for the entire episode. As much as I don’t want to see Layla out Will, if it’s going to happen, I hope it happens soon. I don’t know how much more of self-destructive Whiskey Barbie I can take.

NOBODY KNOWS THE TROUBLE I’VE SEEN | Scarlett repays the homeless man who helped her write a song by letting him clean out Deacon’s gutters and then cooking him dinner but serving it to him on the front stoop. She finds a photo of his family while doing his laundry, and her questions about it anger him so much he takes off. In short, Scarlett should probably just have penned a thank-you note and left it at that.