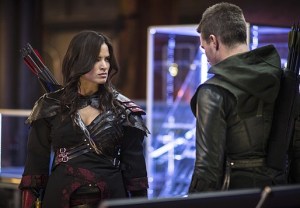 This Wednesday on Arrow (The CW, 8/7c), Oliver Queen is getting not one but two unexpected and unwelcome blasts from the past, who both have the power to destroy the hero.

For starters, Nyssa al Ghul (played by Katrina Law) arrives in Starling City in the wake of Sara’s death seeking answers, and the tension between her and Oliver escalates as they try to figure out how to avenge the masked Canary.

“There’s an opportunity for them to work in concert, but Oliver’s methods and Nyssa’s methods don’t match up,” Stephen Amell previewed during a recent set visit. “She’s the, ‘Shoot them all, figure it out afterwards [type],’ and Oliver’s like, ‘I used to be that way! I’m not anymore.’ So that creates the conflict for them.

“Oliver feels very much as though it’s his responsibility to bring whoever did this to justice,” Amell adds. “And I will say that of all of the convoluted, devious plans that we’ve ever had on the show, the ‘Who killed Canary?’ device is right at the top.”

The mystery will also bring fresh troubles. Nyssa can be volatile, not to mention violent, so she “leaves [Episode] 4 as a ticking time bomb, and Oliver leaves with a whole host of new enemies,” Amell teases.

Could one of those fresh foes be Nyssa’s father aka League of Assassins leader Ra’s al Ghul (to be played by Aussie actor Matt Nable)? Amell hints that the infamous villain will make his entrance soon – and in quite a memorable way.

“If you’re a fan of comics, you’re really going to enjoy the reveal of Ra’s al Ghul — like, the first frames of seeing him,” he says. “That’s going to be pretty cool and create a lot of chatter.” 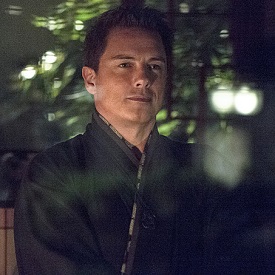 Meanwhile, one of Oliver’s former (meaning: presumed dead!) enemies, Malcolm Merlyn, is back in Starling City this week, setting the stage for an epic face-to-face between the two.

“We had 200 extras there,” Amell says of the showdown. “It is a costume-less, weapon-less, fisticuffs-less exchange. Concurrently, it’s probably the most charged exchange that we’ve had in the show.”

For his part, John Barrowman feels like Malcolm “has always loved Ollie like a son,” a notion he “kind of tried to plant with these little nuances. So this time when we do meet, Malcolm has something to say to him, and it’s not about fighting. It’s very interesting what he has to say and how he says it. I think it’s also a bit of a surprise for Oliver.”

But perhaps Malcolm should be more worried about Ra’s al Ghul’s impending arrival than his relationship with Oliver. After all, he has his own troubled history with the League of Assassins leader.

“He’s concerned about Ra’s being here, but he’s not stupid,” Barrowman insists. “He will try to figure a way to protect himself and, hopefully, those around him.”