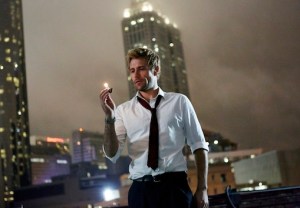 Fighting the good fight takes a gnarly turn in the series premiere of Constantine, NBC’s new supernatural drama based on the DC Comic Hellblazer. After watching Friday night’s premiere, are you willing to stand with the title character against the forces of evil?

We want to hear your thoughts on the episode, but first, a brief recap:

We first meet John Constantine (Matt Ryan, The Tudors) as he’s willingly being prepped for electroshock therapy at a psychiatric treatment facility in England. “In my line of work, there are days you just need to forget,” he tells us via voiceover. “But some, you never will.”

During a therapy session, it becomes clear that John — a self-described “exorcist, demonologist and master of the dark arts” — witnessed a demon kill a 9-year-old girl named Astra and damn her soul to Hell; his emotional anguish over the event is what landed him in the facility three months prior. But he’s done with all of that now… or so he thinks.

When a seriously creepy cavalcade of cockroaches leads him to the hospital’s art room, he finds a possessed patient painting “LIV DIE” on the wall. He chants a little Latin, the windows break, the patient flies around the room, and then everything is back to normal. “A spirit took your body for a spin” while delivering a message for him, Constantine tells her. 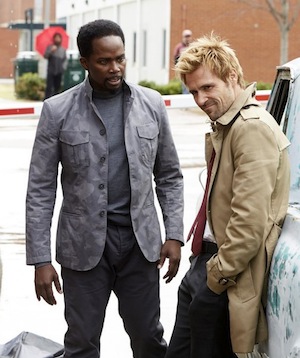 Around that same time, an angel named Manny (Harold Perrineau, Lost) appears and tells a ticked-off Constantine, “I was asked to watch over you.” Manny provides a key detail John left out of his earlier narrative: When the young girl’s soul was damned, Constantine’s was, too. And something big and evil is gunning for him.

After some scary shenanigans involving the possessed body of her now-dead neighbor, Liv is a bit more open to entertaining the impossible. John gives her an amulet that allows her to see trapped souls wandering the earth. “It appears you have your father’s gift,” he tells her… just before the car they’re in is hit by a truck (thanks, demon!) and John’s mate Chas (Charles Halford, True Detective) is gored to death with a live wire.

At her father’s house — which bears more than a passing resemblance to the archives on Sleepy Hollow — Constantine figures out exactly which big nasty wants Liv dead (his name is Furcifer) and Liv realizes that by using the amulet and a map, she can see where bad things are going to happen. (This will prove important later.)

John leans on another friend, Ritchie (Jeremy Davies, Lost), who was around for the Astra debacle and is similarly messed up about it, for help hacking into the city’s power grid. Chas shows up alive (?) — “He has survival skills,” John tells a gobsmacked Liv — and then she and Constantine go to the roof of a tall building to lure Lucifer into their trap.

While waiting for the beastie to show up, John confides in Liv that he’s a self-taught conjurer who started communing with the spirits in an attempt to reach his dead mother. But he hasn’t been able to find her, “Not yet.” (Side note: Ryan’s reading of those two words make for an unexpectedly moving moment.)

But enough with the heart-to-heart: There’s a demon to send on its way! Furcifer shows up and eventually takes on the guise of a busted-up John. Ritchie shuts down the city’s electrical system (thus weakening the power-hungry demon) and it looks like the vanquishing is a done deal… until Furcifer brings forth little Astra. “Release me, and her soul is free,” DemonConstantine bargains, and John’s seriously considering it when Liv clutches the pendant and realizes it’s a trick. So John works his mojo, and Furcifer is no more.

It seems like Liv will be a strong ally in Constantine’s battle… until she freaks out and leaves for California. (We later learn that John intentionally scared her off.) But she leaves her map of potential badness for John and Chas, and Manny also claims to be down for the fight, so there’s that. But what’s with the pullback shot of a young woman sketching John? Nod to the source material, or something more?

Now it’s your turn. Grade the premiere via the poll below, then hit the comments to back up your choice!