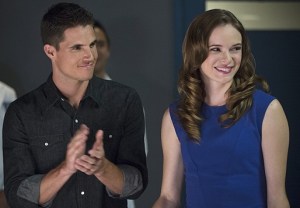 The Flash is breathing new life into Caitlin Snow’s presumed deceased fiancé, Ronnie Raymond (played by The Tomorrow People‘s Robbie Amell). But before he rises, Tuesday’s episode (The CW, 8/7c) features glimpses of the couple as the S.T.A.R. Labs crew prepared to launch the Particle Accelerator that took Ronnie’s life.

“I’m so excited for the flashbacks,” star Danielle Panabaker said during a recent set visit. “It’s a great thing to see Caitlin in her element. She’s a scientist, and she’s excited. This is sort of their Mona Lisa. It’s an incredible unveiling that they’re doing, and she gets to share it with the love of her life, her fiancé.”

Whereas present day Caitlin is closed off, “there’s so much warmth” between the pair in the memories, a vibe Panabaker found easily accessible.

“What’s so great about Robbie is that he’s such a wonderful actor, it made [the chemistry] innate with us,” the actress says. “I adore him, and we have such a great chemistry just as people. So hopefully that comes across when you first see [Caitlin and Ronnie]. There is so much love there and so much happiness. You begin to understand why she’s a sad scientist these days.”

Helping to crack that dour, cold exterior is Barry, who bonds with Caitlin when he gets her to open up about Ronnie. “Barry is getting closer to the whole group at S.T.A.R. Labs,” leading man Grant Gustin previews. “At first, he didn’t necessarily trust them, but he’s finding more and more trust in all of them. And Caitlin is really the person that helps initiate that.” (Despite the moment of kinship, “for Barry, right now,” things are just platonic between the partners, the actor says.)

Given that Amell will reprise his role as one half of the DC Comics entity known as Firestorm – and everyone will encounter him “sooner than I expected,” Gustin teases – how might Caitlin react to seeing her supposedly lost love?

“Caitlin is doing a lot of grieving,” Panabaker replies. “She’s having a hard time letting go of him, and she’s displacing some of her grief on Barry. I can only imagine the trauma of something such as thinking your fiancé was dead, and then maybe suspecting otherwise.”

At least that scenario is potentially less damaging than going from being lovers to bitter foes. In the comics, Caitlin Snow becomes the supervillian Killer Frost, who counts Firestorm among her enemies. It’s a potential fate that Panabaker finds “really exciting.”

“What’s so cool about this show is — at least in my experience — how faithful they are being to all the comic-book lore,” she explains. “They’re so respectful of the stories that have been told. The thought that goes into The Flash costume and all of that, it would be exciting to be a part of that.”

Whatever happens down the line, Ronnie’s imminent resurrection will be an eventful one. “There’s a lot of mystery surrounding that character,” Gustin teases. “And even when [we] encounter him, there’s still a lot of questions to be answered.”