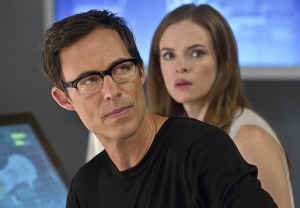 This week on The CW’s The Flash, the latest adversary was a real gas, flashbacks revealed how Caitlin’s fiance was felled on a stormy night, The Old Flash “met” the new one and we learned a shocking truth about how Barry landed on the fast track.

Whereas last week I took issue with the kiddie-centric flashbacks, this time around I couldn’t get enough of the particle accelerator backstory. In fact, it almost had me wishing the series had picked up with events a day or two prior, though I suspect the sum total of flashbacks still to come — Cisco for one has more to tell, about Ronnie Raymond’s sacrifice — will add up to as much.

‎As Barry battled with the best Villain of the Week thus far — a death row inmate who can transform into toxic gas, but was also properly colorful/intimidating in human form — we learned how on the night of the particle accelerator launch, Caitlin’s fiance/S.T.A.R. Labs engineer Ronnie ventured inside the belly of the malfunctioning beast to ensure that its blast would travel upward and not laterally. But in making that fix, Ronnie all but committed himself to death, while all Cisco could do was watch beyond the door of the sealed chamber.

‎These flashbacks brought to light what a solid cast The Flash has put together, as Danielle Panabaker delivered such depth of emotion to Caitlin’s despair, saying: “I didn’t want him to be a hero; I wanted him to be my husband.” Similarly, Carlos Valdes showed us that as much as he can be the giddy, villain-naming fanboy, he also can register somber loss.

Knowing what we know about Ronnie’s actual fate, coupled with the fact that Victor Garber doesn’t arrive until midseason, there is much more to be told here. Is that where Cisco was heading, before Caitlin cut him off? Did he witness more of Ronnie’s tragic experience?

And then there’s Jesse L. Martin, so moving when Joe paid an overdue visit to Barry’s incarcerated father, to acknowledge that he had been wrong, and for so long. But what’s important, Henry Allen noted, is that Joe always believed in Barry.

Speaking of Henry (played by TV’s original Flash, John Wesley Shipp), how fun to see him lay eyes on the “red streak” there in the visitation area. Loved how Barry vibrated his face to conceal his identity from Dad. (Henry’s anecdote about Barry’s first steps as a baby was a bit on the nose, however.)

Elsewhere in the hour, Iris came clean to her father about her romance with and Detective “Pretty Boy” Eddie Thawne, only to be reminded of just how good Joe’s detective skills are. Now, is it me or did Eddie seem easily irked in that one scene, where it appeared Iris was gonna give him the hook? Way to zoom to conclusions!

Of course, the night’s biggest reveal came with bonus tag, as Dr. Harrison Wells — whilst admiring Barry’s stowed supersuit — flashed back to the particle accelerator’s malfunction, and how he watched, via his secret room, surveillance camera footage of Barry getting zapped at home. “The bolt of lightning chose you,” indeed.

NOTABLE QUOTABLES AND OTHER FLASH-Y FUN
* The apparently time-travelling Wells saying, “I feel like I’ve waited for this day for centuries.”
* The movie theater marquee’s nods to Blue Devil and Rita Farr (aka Elasti-Girl)
* Caitlin (who is fated to be Killer Frost) saying of fiance Ronnie (who is fated to be Firestorm): “He used to say we were like fire and ice.”
* “Which one is the north wing?” “The one with the Big Belly Burger…. I eat.”
* “The Mist!”

What are your thoughts on The Flash to date? And anyone wanna join me in making Gotham comparisons?