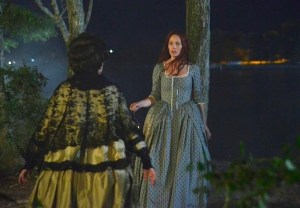 If there’s one lesson to take away from this week’s Sleepy Hollow, it’s that everyone should know CPR — especially if you’re a charter member of Team WTF.

If there’s a second lesson to take away from this week’s episode, it’s that you really don’t want to mess with Katrina, because redhead will mess you up, lie about it for centuries and then claim the moral high ground when confronted.

In between, there’s Jenny, Hawley, Jenny on Hawley (mrrow), a tasty bit of Ichabod’s back story and one truly unfortunate Revolutionary War re-enactor. Let’s dive into “The Weeping Lady” and see what depths we can plumb.

FRESH DUDS | We open the episode with a lady in Ichabod’s cabin; it’s Caroline, the red-haired lass Ichabod met in last season’s finale. Apparently, he’s been hanging around with her and some other re-enactors in the five free minutes he has when Moloch takes a smoke break from trying to destroy the world.

Caroline happily gifts Crane with handmade new-old clothes, dairy products and preserves. Oh, Ichabod, a girl doesn’t go all Etsy on you unless she really thinks you’re worth the trouble — a fact he meets head-on when she makes it clear that she wouldn’t mind churning his butter every now and then. She praises his dedication to the re-enactment lifestyle (“You never break character!”) while I question her dating criteria, but we’re both interrupted when Abbie walks in… just after Ichabod has mentioned, apparently for the first time, that he is a married man.

Naturally, Caroline assumes Abbie is the wife in question, and addresses her as such. Not sure what’s funnier: Abbie’s face as she hears herself addressed as Mrs. Crane, or her amusement as Ichabod tries to dig his way out of a very awkward situation. An embarrassed Caroline skedaddles, and a chagrined Ichabod claims he had no idea. Abbie’s not having it. “Anyone could tell that girl had a case of Crane on the brain,” she teases him.

Later, Ichabod’s feeling so bad about the whole thing that Abbie drives him to Caroline’s house, and they make nice. She forgives him, he bows gallantly, and they make plans to see one another at the Battle of Saratoga on Saturday. (Spoiler alert: Caroline’s not going to make the battle, because a watery spirit in her house kills her just after the Witnesses pull away.)

A SOGGY MESS | The next morning, Crane is very upset when he meets Abbie on the banks of the river, where Caroline’s body washed up. (Side note: I’d be more into Crane’s repeated insistence that Caroline was a good friend if we’d seen her in his presence or heard her referred to at least once since last season.)

The Witnesses eventually realize that the spirit they’re looking for is the Weeping Lady, a mournful ghost who’s been haunting Sleepy Hollow for centuries but has only recently turned violent. And the reason the partners realize what’s going on is because the specter goes after Abbie in the middle of the town library, where the pair are doing research. 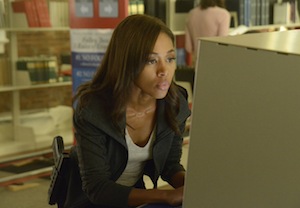 ABBIE GO BYE-BYE? | The Weeping Lady drags Abbie into an inky, wet spot on the floor and tries to drown her there. When Abbie surfaces, she gets a fleeting glimpse of the area where Caroline was found, but then the black-veiled ghost grabs her and holds her under once more. Abbie’s just about a goner when Ichabod plunges his hand into the water and pulls her out — but she’s taken in too much water, and she’s not breathing.

Though we don’t see this photo in action, we watch a tormented Ichabod cry, “No no no no Abbie!” over his fellow Witness’ lifeless body. He very much thinks she’s dead, and that certainly comes across. Thank goodness for Hawley, who earlier made his presence known at the library and who swoops in to revive Mills with some (really half-assed) CPR. It’s a like that Season 1 Angel-Buffy-Xander moment; too bad, Hawley, because we all know how that triangle ended for the XanMan.

A while later, Abbie’s like new again, and Team WTF has a lead: Ab managed to snag some of the ghost’s lace cloak, and of course Ichabod knows exactly who it belonged to… 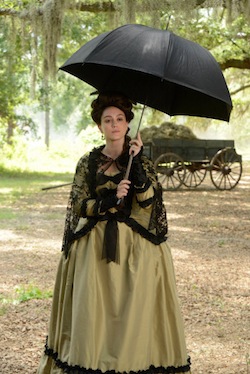 THE EX FROM HELL | In a flashback, we see Ichabod and Katrina, circa her engagement to Abraham, gently flirting. (Is it just me, or does Ichabod rock some seriously deep Vs in this episode? Not a complaint, just an observation.) Then, a woman wearing black lace and carrying a huge parasol approaches and is surprised that Crane isn’t happy to see her: She’s Mary Wells (Turn‘s Heather Lind), and she’s his fiancée come to bring him home to England. Katrina’s all, “What in the what what?” Crane hastily explains that they’d mutually broken off their parents’ agreement before he’d left for the colonies, but Mary wants back into the potential arranged marriage.

Mary is 10 lbs. of crazy in a 5-lb. corset, so it seems odd but not out of character that she sends Ichabod a letter the next day wishing him well and saying that she’s returning to England for good. Oh, speaking of letters? Katrina finally remembered that she’s a witch and mustered up a spell to get a crow to carry a love letter to her husband… but it fell in the Weeping Lady’s (AKA Mary’s) Puddle O’Pain when Crane was saving Abbie, so Katrina’s next on her list!

ICH IS TICKED | The Witnesses hurry to Maison Headless, just in time to watch the Horseman ride off. They’re too late for Katrina, who’s already been Weepified, so they hurry to the spot where Caroline was found and hope to catch her on that end. Meanwhile, Katrina is literally drowning to death, so she does some underwater mojo and frees herself from Mary’s grip. Back on solid land, she tells Ichabod she can liberate Mary’s spirit — summoned by Henry — and send her to her rest, but she’ll have to use dark magic, and she’ll need Abbie to anchor her. (Side note: Anyone else paranoid like me and worried that being involved in that “dark magic” will somehow work against Abbie in the future?)

So the ladies do some chanting, and Mary is reduced to her rapidly rotting corporeal form. Ichabod gathers her in his arms and wonders why she never left town. She merely points at Katrina and withers away, leaving Ichabod and his furrowed brow of What the Heck Is Really Going On, Wifey? to stare accusingly at the redhead (who, truth be told, looks rather shifty).

As Ichabrow and Abbie listen, Katrina relates that Mary called her to the woods back in the day because she was jealous; when she launched herself at Katrina, she fell over the side of an embankment, hit her head on a root and died. (!) So Katrina did an enchantment to make her handwriting look like Mary’s, and she sent Ichabod the letter. (!!) If he had escorted Mary’s body back to England, Katrina reasons, he would’ve stayed and not been able to take his rightful place as Witness. “The mission is far too important, my love,” the witch coos, but Ichabod is not having it. Nevertheless, when Abraham rides in and tries to behead Crane, Katrina pleads for leniency, and her headless captor complies before they go home.

Anyone else think Katrina is lying about… everything? What do you think Moloch means when he — amidst slapping Henry around — says, “I want the witch turned, not dead. She is one of the Hellfire Shards, a chosen vessel”? And did you feel a little sorry for Henry as he sobbed in failure at the end of the hour? Maybe the Horseman of War just needs a hug?

THE OTHER MILLS SISTER | Jenny (hi, Jenny!) returns a crossbow to Hawley and seems inclined to follow his arrow wherever it points, but he reminds her “I thought we decided we weren’t going to do that anymore.” She wonders if he has a main squeeze (this whole situation is going to be bad when it comes to a head, no?), but he replies in the negative, so she kisses him and leaves him wanting more. (Side note: Any man who sets up an outdoor living room on a New York dock in the fall is a fool. You gotta hide your Wilmington a little better, Sleepy Hollow!)

Now it’s your turn. What did you think of the episode?  Sound off in the comments!