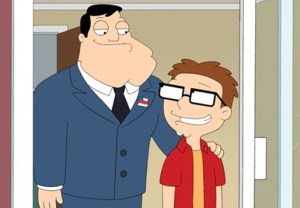 “It’s like you had this family you were born into, and they raise you, but they don’t really understand you,” Weitzman explains to TVLine. “Finally, you get older and they kick you out of the house, then you find this other person who actually likes you for who you are and wants to spend the rest of their life with you. We’ll find out how long we can live happily ever after, but this is a great start.”

And with a new home on cable comes a much longer leash, one Weitzman promises Dad will take full advantage of down the road. TBS has ordered two 15-episode seasons, and it’s in that second season — currently in production — that Weitzman says the writers really begin to push the envelope.

“We do an episode in the first season where Steve says ‘eff you’ to his mom, but apart from that, we’re really finding our groove now,” he explains. “Being able to say the word ‘t-ts’ really inspired us creatively.” 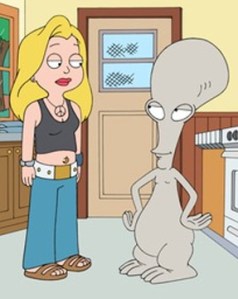 Here’s a quick rundown, straight from Weitzman, of some episodes fans can look forward to on TBS:

* “We’re doing an episode where Hayley considers having an affair with a married man.”

* “Stan and the guys in the C.I.A. end up getting caught on a mission behind enemy lines and become P.O.W.s. They may also get torn apart by yaks.”

* “We’re doing another one of our reality-altering Christmas episodes.”

* “We’ll see another episode of ‘Wheels and the Leg Man,’ in which Francine is kidnapped and Steve and Roger have to investigate.”

* “Steve and Hayley join a girls’ roller derby team, but Hayley’s not very good, so they insist she brings her sister… which is Steve.”

* “And I’m really happy with this one episode where Seth [MacFarlane] seels the whole show to a Chinese billionaire for a shoe factory. The man promises not to make anything different on the show, but he lies. It’s a very meta episode.”

What fans shouldn’t expect, however, is a departure from the humor and (occasional) heart that has endeared the Smith family to us for nearly 10 years.

“I guess we could have moved the house somewhere else, maybe to another neighborhood, but we wanted to keep everything as is,” Weitzman says. “We’re moving from one network to another, but we’ll keep being the same show we’ve always been — just a crazy, fun show.”