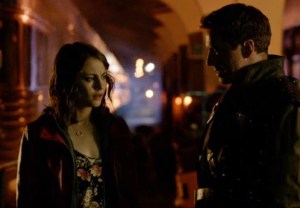 Prepare for one twisted family gathering on Arrow when Oliver travels to Corto Maltese in search of Thea (Willa Holland) — and finds more than he bargained for — in Wednesday’s episode (The CW, 8/7c).

“He knows very little about what she’s done [during the past five months] other than that she has lied about where she is,” Arrow‘s leading man Stephen Amell previewed during a recent set visit. “Oliver calls her on that immediately.”

As the hour’s flashbacks reveal, his little sis has spent quite a bit of time with her biological father Malcolm Merlyn (John Barrowman), and she’s got the new skills to prove it.

“He’s been [taking] her under his wing,” Holland shares. “She’s been up to — not necessarily no good — just something a little bit different for Thea.”

During her training sessions, the bond between dad and his progeny has evolved in “very interesting” ways. “The Thea Queen-Malcolm Merlyn relationship is not going to be anywhere near normal, and I don’t think anybody would expect it to be,” Holland notes. Her onscreen pop, Barrowman, takes it a step further, labeling it “the most dysfunctional, brutal father-daughter relationship.

“You’re going to look at it and go, ‘This is too uncomfortable, but I really want to [keep] watching it because it’s like a car crash,’” he continues. However, as twisted as the dynamic may be, “there is a genuine love there and caring for her, but he wants her to be strong. He wants her to be able to stand on her own two feet.” (Barrowman also warns “your jaw will hit the floor” during the flashbacks.)

In a weird way, there is also trust between the two because, while Malcolm is who he is, “the one thing that he hadn’t done to Thea was lie about who he is,” Holland points out.

“Knowing Malcolm’s past, it’s definitely hard for Thea to trust him, but I think over the last five months, she’s gotten to known Malcolm in a different way,” she explains. “They have a different type of relationship than you would expect from them off the bat.”

But could it still be one full of deceit? When it comes to Thea’s evolution, Malcolm is “happy that he is in control of the situation,” Barrowman says. “How he does control is…pretty vicious.” While he used his money, power and physicality in the past, “this is his quest to emotionally manipulate people now.”

As Malcolm has grown closer to Thea by being honest, the distance between Oliver and his sister has only grown wider, both literally and figuratively. “He comes to the realization that the only way to bring her home when it was lies that drove her away is to tell her the truth,” Amell previews. “How much of the truth he has to tell her is one of the crucial points of the episode.”

Will it be enough to lure her back to Starling City? “The one thing that could always pull her back was Oliver, and her love for him and that side of her family, as well as Roy,” Holland says. “She has a lot in Starling City; it’s her home. But right now, I don’t think she has [any intention] to go back. She’s found a new Thea Queen and is very happy with who she is at the moment.”