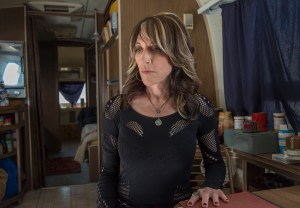 The walls are closing in on Gemma Teller.

In this week’s Sons of Anarchy, the Queen of SAMCRO learned that her increasingly chatty accomplice, Juice, had been captured by Jax — a worst case scenario if ever there was one. Meanwhile, her buddy Wayne appears to be an episode or two away from connecting some troubling dots about the role his crush played in Tara’s horrific murder.

TVLINE | Things really started to unravel for Gemma this week. At this point, what’s keeping her from just turning a gun on herself?
[Laughs] I’ve said the same thing to my husband [series creator Kurt Sutter]! I’ve said the exact same thing. This is what I know about her: She’s really able to compartmentalize. She’s really convinced that, ultimately, it would be worse for her to be gone because of her grandsons. She really does believe, like she says in the first episode of this season, that [she has] to keep this secret because if something happens to Gemma, those boys will never know a strong woman. She also wasn’t aware that this secret would lead to what it’s leading to, so it’s just getting bigger and bigger and bigger. Also, you have to remember that what we’re doing in a season takes place over a week or two weeks. In terms of the world of Charming, it’s unraveling very quickly.

TVLINE | Plus, most of this season’s deaths have stemmed from Gemma’s lies. Have you been keeping track of the body count?
[Laughs] No, I haven’t kept track. I have no idea! It’s over 10, I’m sure.

TVLINE | Have you ever turned to Kurt and said, “Enough is enough. Gemma’s got enough blood on her hands”?
I would never say that, and I’ll tell you why. My husband is the storyteller, and I’m helping him tell the story. He’s the one who decides what 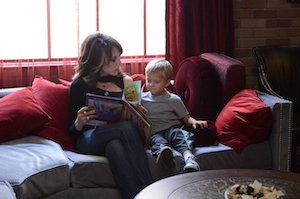 the story is. As a character, I don’t decide what she’s going to do or her point of view. When I say things to him, it’s really more of a comment, like, “Oh my God, how does she live with herself like this?” But I’m not even suggesting anything to him. It’s not really my space or my place to say she should do this or that.

TVLINE | Speaking of Gemma’s grandsons, we saw last week that Abel has a bit of Jax in him, when he took that hammer and tried to protect Thomas. Is Gemma feeling guilty that she’s had a hand in that behavior?
Oh, absolutely. Every little thing that happens starts to unravel her more and more, because those defense mechanisms just don’t work anymore. Ultimately, even she, who has that ability to deny, can’t avoid what’s going on.

TVLINE | Do you think Gemma really would have killed Juice last week, if given the chance?
Yeah. [Laughs] I do! That moment in the car, with her whole plan in place — she saw how crazy he was when he killed that Chinese dude in the hotel room. She saw how far gone he was. You have to remember they’re outlaws — all of ‘em. It would have been very difficult for her to kill Juice. She has a certain fondness for him. But at the end of the day, they do what they need to do.

TVLINE | She’s also turning on Unser. Does she perceive him to be a threat, perhaps in the same way that Juice is?
She knows that Unser is now working with the police. She went into his trailer and she saw all the crime scene pictures, so she knows that he’s not believing her. Her plan, too, was that they’d pin it on this Chinese guy, and then it’d be done with. That’s it. They’ve got a murderer, and nobody’s going to ask any more questions, and it’ll just be done. But that didn’t happen, and Unser is a part of it. The fact that he wants Jarry to be talked to — anything that keeps her involved in it is a problem for her. So Unser is a problem.

TVLINE | One person that Gemma actually connected with this week was Gertie, the waitress played by Lea Michele. Why do you think she latched on to her?
I’ve always thought Gemma connects to anybody with a heart. She’s really motherly. So here’s this girl that Gemma’s an a–hole to, and then she immediately pulls back and sees that the girl is just warm. Gemma’s pretty alone at this moment, and anybody that shows her some kindness [she responds to], like Gertie offers her car to sleep in and offers Gemma to come out and smoke with her — she’s kindred, in a weird way. Gemma, 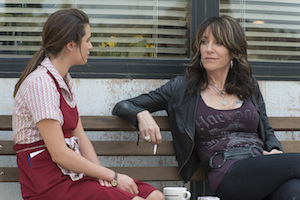 at this moment, thinks no cushion is too soft, wherever she can find it.

TVLINE | This was a very different role for Lea, too. What was it like to film those scenes with her?
She was fantastic. You never know what to expect, and she was so happy to be there. She told me that she hadn’t done anything other than Glee, in terms of other work on television. That was exciting for her, and she was awesome.

TVLINE | Gertie overhears Gemma chatting with The Ghost of Tara. Those chats are tinged with a surprising warmth and affection. How do you approach those scenes?
Well, Gemma did not not love Tara, and I really do believe that the act of violence was like a blind rage. It’s consoling for Gemma to talk to Tara. She talks to her as if she’s really just sitting right there. And as an actor who loved working with Maggie Siff, it’s really easy for me to just put Tara there and talk to her.

TVLINE | We also saw a rare moment of vulnerability at the end of this week’s episode when Gemma clutched Nero and broke down. Does she think Nero can help her out of this mess? Because it seems like he’s starting to get suspicious of her, too.
I don’t think she thinks that. She thinks that Nero is a pure soul. He’s one of the good guys. She’s breaking down in that moment because of the realization that her son is talking to Juice. That’s the first time we see her with the real conscious thought that her son might find out what happened.

TVLINE | I was a little shocked when Gemma said, “If Juice tells Jax what he knows…” because it seemed to almost hint too much at Gemma’s big sin. Were you surprised by that?
I don’t think that’s what it meant to Nero. Nero, at the beginning of that scene, has just found out that Gemma was helping Juice. There’s two things going on. Jax is already pissed off at Juice, and what Nero interprets is, “Gemma means that she was helping Juice.” I don’t think, in anybody’s consciousness, that anybody thinks that Gemma had anything to do with Tara’s murder. That’s not even in the ether. 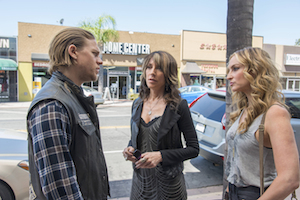 TVLINE | In the season premiere, Gemma insisted to Juice that she wasn’t a psychopath. Do you agree with her?
Yes. She is not a psychopath. Do I think that, given different circumstances, she would have killed her daughter-in-law? No. What happened was a perfect storm. She really did believe that her son and the club and her entire way of life was being brought down by this woman, and she really did believe that Nero was leaving her, and she really did believe that this was the end of life as we know it. And she was also getting super loaded that night. She didn’t premeditatively kill Tara. She didn’t even know Tara was going to come to the house. It was literally a blind rage. If you asked her after the fact, she would have been in a blackout. Like, “What happened?” She’s not a psychopath, because it’s not like she doesn’t have remorse. She does, and she feels very sorry and sad that that happened. But at the same time, she has rationalized to herself why it’s good to throw somebody else under the bus and not tell the truth.

TVLINE | How quickly will things deteriorate for Gemma in these final episodes?
What do we have, another seven episodes? That’s how quickly they unravel. [Laughs]

TVLINE | Has Kurt divulged anything to you about how the ending will play out? We’re eagerly anticipating the big Jax-Gemma showdown, if and when Jax learns the truth.
I know a lot of answers to that, and I’m not going to tell you. [Laughs] Except that it will not disappoint. Keep watching.