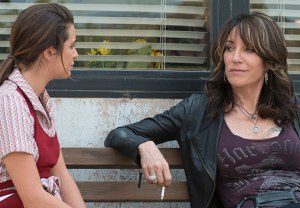 If you pull a loose thread on a piece of clothing, the entire thing can unravel in minutes. And on Tuesday’s episode of Sons of Anarchy, Gemma found that to be true for more than just a fall sweater.

Indeed, the numerous lies that Gemma has told to save her own behind this season began to blow up in her face, leading her to a vulnerable place that we haven’t seen Mama Teller go to in a long time (and I’m not just talking about those 12 miles she walked in spiked boots).

What’s interesting about this particular episode of Sons is that nearly every scene and character intertwines with one another throughout these 90 minutes. On one hand, there’s SAMCRO’s latest business transaction: In order to pay back a debt to Ron Tully and the Aryan Brotherhood (see also: “that botched drug deal that got one police officer killed and another critically injured”), SAMCRO strikes a deal with Alvarez that gives the gun business to the Mayans. In return, Tully’s men will be able to distribute heroin in Stockton, with the other half of Lin’s turf going to Tyler and the One-Niners, and Jax will gain access to Lin while he works through his sticky legal situation. Everybody wins, if you overlook how dangerous it all is! Oh, and speaking of Tyler, he and Jax make it clear that they have a common interest in taking down August Marks. To prove that’s their goal (and to win back the trust of Tully’s main associate Leland), SAMCRO guns down OG DuLane and all of his men, piling the bodies up at Damon Pope’s construction site. (Message received, SAMCRO, loud and clear.)

But within their new business deal with the Mayans, SAMCRO receives a little something extra to sweeten the pot: Juice. After SAMCRO’s traitor comes to the Mayans with cash (from liquor store robberies), Gemma’s car and the promise of intel on SAMCRO, he asks for safe passage to Mexico and instead comes face-to-face with Jax and the boys. First, he’s stripped of his cut and put in a storage closet — along with Nero, who’s required to stay there until the Mayans successfully make a deal with the Sons — but once all the business talk is out of the way, Juice’s former brothers lead him out of the Mayan headquarters and force him to walk the proverbial plank.

All of this ultimately leads back to Gemma, who’s been forced to travel on foot after Juice had her at gunpoint then drove off in her car. She happens upon a truck stop and bonds with waitress Gertie (played by Glee‘s Lea Michele, in a role that I like to imagine as Rachel Berry in an alternate universe where Broadway never panned out). When Wendy and Unser arrive at the diner to pick her up, Gemma spins yet another tale, lying that Juice forced her to travel east, then kicked her out of the car near Salt Springs (which Unser doesn’t believe, but Gemma is nothing if not convincing).

When word gets out that the Oakland City Council is pressuring the DA to offer Lin a deal, both Unser and Jax convince Gemma to spill to the sheriff’s department about what she saw on the night of Tara’s murder, which will keep SAMCRO out of the spotlight for a while. She does spill, but through gritted teeth, and that’s when things start to fall apart for Jax’s mama. When she reunites with Nero later that night, he tells Gemma that he spent most of his afternoon in a storage closet with Juice, then confronts her about whether she helped Juice hide out all this time. (Based on her sudden rapid breathing and inability to maintain eye contact, he quickly figures out that she did.)

Then, when Nero breaks the news that Juice is now in close proximity to Jax, Gemma completely loses it, holding Nero close and crying into his shoulder. “If he tells Jax what he knows…,” she trails off, distraught. And even though Gemma is quite literally clutching Nero for support in her dire situation, I wouldn’t be so sure that he can help her. After all, Nero gets two more hints throughout the episode that Gemma was actually responsible for Tara’s murder. First, the Mayans note how “convenient” it is that Gemma was the only one who witnessed Lin’s men entering Jax’s house on the night Tara was killed. Later, when he and Juice are trapped in a closet together (forgive the R. Kelly reference!), Nero picks up on Juice’s hints that Gemma was involved in the murder, and he seems all but convinced that Gemma’s not to be trusted by the time she breaks down in his arms. (So… who’s bringing the popcorn next week?)

Your turn! What did you think of the episode? Do you think Officer Eglee will spill the beans to Unser? Sound off in the comments!