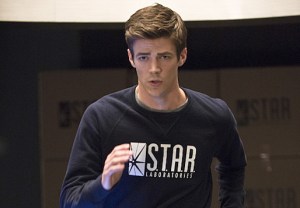 What became quite evident in this second episode of The CW’s The Flash is that while Oliver Queen is a grown man who calls the shots, Barry Allen is, comparatively, a kid — and one with wise elders surrounding him. And it is what those adults say, how they counsel him, that will help steer the “red streak’s” journey.

The clash of ideologies between Joe West, the CCPD detective who raised Barry to such an extent that he freely calls him his “kid,” and Dr. Harrison Wells, a brilliant scientist eager to explore The Flash’s potential, was at the fore this week. Joe worries that while Barry might be able to run a three-second mile, he’s no warrior fit for battle. Wells and the S.T.A.R. Labs team, meanwhile, are game to let Barry chase down other metahumans, but want to draw the line at rescuing kittens from trees.

But for all their collective genius, West warns the S.T.A.R. Labs trio: “You don’t know what you don’t know.” And that could get well-meaning Barry killed.

This episode was also about what Barry doesn’t know, about the small details in fighting crime at superspeed. For one, he’s still shooting past destinations. He sometimes rushes off so abruptly he forgets to grab a change of clothes. And he needs extra amounts of fuel to power his new metabolism, so try not to envy him when he sits down to scarf 850 tacos a day.

The other difference between The Flash and Arrow (and The Flash and Arrow) is that Barry, as we’ve known since the premiere, is having gobs of fun. Watch as he turns his hand into a makeshift centrifuge, or as he “stops time” to tell Iris all the things he wish he could, yet can’t. (Now adding to that anxiety is Iris’ fixation with the “red streak” being spied doing great things all over the city. Sorry, Eddie — someones got a crimson crush.)

The villains thus far, alas, don’t seem to be exhibiting as much glee. Last week, we had the “weather wizard” with the perma-sneer. This time, it was “Multiplex,” who sported a smug mug on every duplicate of himself. But it’s probably wise to start the series off with disposable, unmemorable mischief-makers, allowing Barry opportunity to refine his game in time for the onset of cooler criminals, like Captain Cold.

Oh, how I loved Captain Cold as a kid.

The hour wound down on wildly different notes — first, with Joe acknowledging that Barry’s partnership with Wells & Co. is the only way Central City can survive these metahumans, and then avowing privately to Barry, “We’re going to figure [your mother’s murder] out together.” We then cut to Wells visiting Simon Stagg, whose head is full of plans to capture this “man in the red mask” and redefine “what it means to be human.” And on that note, Wells drives a dagger into his peer, explaining that The Flash — as this speedster one day will be known, he says — “must be kept safe.”

What did you think of The Flash‘s second episode?