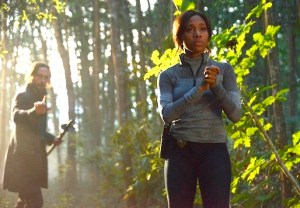 Around Sleepy Hollow‘s second episode ever, I decided to make like Abbie under the spell of a mystical flute and happily follow where the Fox drama chooses to lead.

But this week’s installment prompts me to revise my loyalty, just a wee bit. Because even though everyone from Tom Mison and Nicole Beharie down to the guy who paints Moloch’s horn tips* swears that Ichabod and Abbie are not at the beginning of a slow burn romance, “Go Where I Send Thee” delivers a different message.

A brief, but related, digression: There’s a moment in The X-Files‘ second season, just after Scully is kidnapped by Donnie Pfaster, where Mulder explodes in anger and wonders aloud how no one saw a “pretty woman” get run off the road. I remember thinking at that exact moment, “He loves her” — and while I didn’t need immediate payoff on that suspicion, it provided very entertaining (and ultimately correct!) subtext as the seasons rolled on.

I get the same feeling from this week’s Sleepy Hollow, which finds the Witnesses sharing moments both flirty and fraught. Am I reading too much into this fun little show, dear Sleepyheads? Maybe my noggin is screwed on as backwards as Andy Brooks’, or maybe we’re at the beginning of a beautiful more-than-friendship. Either way, let’s review what happens during the hour.

*Full disclosure: I’m kidding. I have not actually interviewed the person who touches up Moloch’s make-up. But find me someone associated with this show who does say there’s some Witness-on-Witness action in the offing, and I’m a gilly-gaupus.

BEEP-BEEP-BEEP-BEEP YEAH! | Let’s start with the most important development in the episode: Ichabod now can drive. Though he fakes nerves at first, those quickly fade as he fasts-and-furiouses around a parking lot while Abbie hangs on in the passenger’s seat. (I’m assuming Miss Jenny taught him those e-brake turns?) Off of seeing Crane so proud of himself, Abbie notes, “I’d say you’re well on your way to independence.” His brows narrow. “In case something happened to you,” he finishes. Wow. Way to bring us down there, Ich.

He continues. “Hear me, Grace Abigail Mills,” — and you can see Abbie think, “Damn, full name and everything?” — “It is not our fate for one of us to bury the other. We shall be victorious or defeated together.” Aw, Witness bonding moment! Plus, he continues, “we’re building our army” against evil… which might be overstating it a little there, Crane. In addition to the two of you, there’s Jenny, Irving (captive) and Katrina (also captive). That’s not even enough to mount a ninth inning rally against evil.

PIPER? I BARELY KNOW ‘ER! | The monster of the week is the Pied Piper, a Colonial era man-turned-demon who lures 10-year-old girls from one of Sleepy Hollow’s founding families to their deaths. He does this by playing a flute made of bone, which issues a tune so sweet it compels people to follow it wherever the monster wishes. Because the missing girl, Sarah, is the daughter of Abbie’s former foster care case worker and a 10-year-old from that family, Ab is really determined to bring the kid home.

Abbie and Ichabod find the bone flute (sounds dirty, but it’s not) in the forest, where Ichabod instantly recognizes it as an ancient Chinese instrument and — of course — is able to play it like a pro. The only problem: The flute’s music turns Abbie into a wandering zombie, though the partners quickly turn that into a plus by recording a loop of the music, sticking some earbuds on Mills and setting her loose in the forest. The tune leads Abbie and a trailing Ichabod to the Pied Piper’s lair; along the way, they encounter an injured Hawley, whose run-in with the demon the night before left him bleeding.

ANYTHING FOR A BUCK | Hawley saw the thing take the girl, and he agrees to help the Witnesses if they’ll turn the flute over to him in exchange; he was in the woods, after all, trying to procure it for a buyer. Ichabod is not a fan of this plan, especially after the blonde one’s disappearance last episode. But Abbie says it’s cool, so all three of them find the Piper’s underground hideout, free the girl (who’s still alive) and then blow the place to bits.

Hawley’s all, “That was fun, but gimme the bone now, please.” (Still not dirty.) Ichabod calls him a “privateer” — which I shall henceforth level as a supreme insult at people who tick me off — and Abbie pretends she’s fine with the agreement, but then breaks the bone in half before handing it over. Ab and Ich return the girl to her parents, but her mom seems sad, still.

Back at the archives, Mills and Crane realize that if the Piper can’t take the family’s 10-year-old daughter each generation (to make a new flute, of course), he’ll kill all of the children of the family via illness. And that’s why they find the girl and her mother in the forest, where Mom is trying to sacrifice her daughter to the demon in order to save her other kids. Ichabod and Abbie convince her that they can help, so she surrenders her gun — just as ol’ P.P. himself shows up and starts swinging his sharp staff around. (Side note: Just thinking about how much therapy this child will need throughout her life exhausts me.)

Ichabod executes some fancy sword work in the dark with the baddie, but ultimately Abbie’s the one who shoves the staff through his chest, killing him. “Privateer,” she grouses. (Heh.)

ASSASSINS BLEED | While perusing the Bible in the asylum’s library, Irving has a vision of himself in a black tank top and sweatband, killing Sheriff’s Department officers in what looks like a postapocalyptic scene while the armored-up Horseman of War looks on in the background. Then, the Bible sets itself on fire. Troubling.

When Henry visits, he tells Irving that firing him means that all of the financial assistance Henry has directed toward Macey and Cynthia will disappear. Oh, and he owns Frank’s soul, thanks to that sharp-tipped pen that made him bleed into his signature a few episodes back. The lawyer leaves Irving with this bon mot, which can only fester in a place where there’s nothing but time to think: “Have Abigail Mills and Ichabod Crane done anything but bring misery and suffering into your life?”

Later, we learn that Henry was the mystery buyer of Hawley’s — though Nick didn’t know that. And Henry doesn’t care that the bone is broken, because he’s more interested in grinding it to a powder and then tasting (ew) it. “It’s perfect,” he declares. But for what?

BRING ME JAVA, BRING ME JOY | Meanwhile, the Witnesses celebrate their win at a waterfront café. Ich rails against the “sadistic larceny” of paying so much for “a gaudy hillock of overheated milk atop a thimble-full of coffee” — AKA a cappuccino — but the bliss he experiences upon drinking the beverage changes his demeanor instantly. 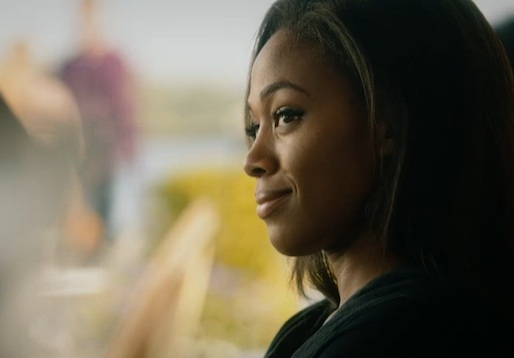 Abbie giggles at the foam all up in his beard and lovingly — yeah, I said it — wipes it off, giving him a look of such unabashed affection that I have to screengrab it and insert it here as proof that there is, to quote Disney’s Beauty and the Beast, something there that wasn’t there before.

Think I’m wrong? Let’s duel it out in the comments! (Just allow me to grab an ancient sword and some noise-cancelling ear thingees first…)