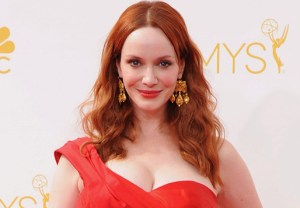 Mad Men‘s Christina Hendricks is traveling even further back in time for her next TV project.

The five-time Emmy nominee has joined the cast of Comedy Central’s Another Period, our sister site Deadline reports, playing a mysterious servant named Chair. A spoof set at the turn of the century, Period tells the story of the Bellacourts, an insanely wealthy family from Newport, R.I.

* Alex Carter will guest-star on an upcoming episode of CBS’ Stalker, TVLine has learned exclusively. The CSI vet will play Kenneth Black, a real estate mogul who loses everything as a result of his bad choices.

* Jamie Bamber (Battlestar Galactica) and Riley Smith (True Blood) will play a pair of brothers on The CW’s midseason drama The Messengers, according to EW. Bamber’s Vincent Plowman is the “aggressive” co-chairman of Plowman Family Farms, while Smith’s Mark is more of the “quiet,” resentful type.

* TBS has temporarily made American Dad‘s 11th season premiere available to watch online, in advance of its Oct. 20 airing: