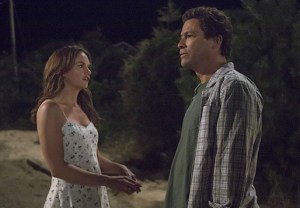 The seeds for Showtime’s The Affair were planted on Sunday night — will you be sticking around to see how this “He Said, She Said” drama plays out?

Co-created by In Treatment‘s Sarah Treem and Hagai Levi, The Affair stars Dominic West (The Wire) as Noah Solloway, a New York City school teacher and aspiring novelist who is spending the summer at his in-laws’ estate out on Long Island. As he, wife Helen (ER‘s Maura Tierney) and their brood of kids arrive for this getaway, they make the acquaintance of a local waitress, Alison (Luther‘s Ruth Wilson).

How the story unfolds from there… well, it depends on the distinct point of view provided by two separate narratives, one courtesy of Noah, the other being Alison’s.

The former scenario paints Alison as a bit of a flirt who, especially later, when bumping into Noah at a beach bon fire, entices him to behave badly. Alison’s version of events, meanwhile, casts Noah as the instigator of the eventual affair, while also fleshing out the world from which she comes — which includes the tragic loss of a child and a not-completely-sympathetic, at-times physical husband (Fringe‘s Joshua Jackson).

The aforementioned points of view are presented in the context of flash-forward conversations with law enforcement officials, in interrogation rooms, for a purpose thus far unknown.

Did one of the innocent significant others wind up dead? Is one point of view more accurate than the other? Or does the truth lie somewhere in between?

Will you continue watching to find out?