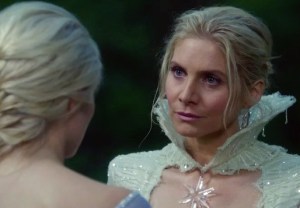 This week on ABC’s Once Upon a Time, Marian found herself in a free cone daze, Robin Hood and Emma made romantic confessions, Hook got his hooks into Gold and, in flashback, Elsa made a cool connection.

RELATED Regina Frozen Out? Once Upon a Time EPs Urge Fans to ‘Wait and See’

IN STORYBROOKE…. | Robin and Marian are touring the town when they fall prey to li’l Roland’s “But Regina lets me” appeal for ice cream. Any Given Sundae’s proprietor welcomes Marian with a cone that’s on the house — and also drizzled with some hocus-pocus that begins freezing her during Mary Margaret’s first “fireside chat” as mayor. This twist only adds to the townsfolks’ suspicions about newcomer Elsa.

Meanwhile, Emma grills Gold about his connection to Elsa, seeing how she had been trapped in an urn inside his “secret vault of terror,” but the Dark One — even when “commanded” to tell the truth by Belle, beholding the (fake) dagger — claims he’d never seen nor heard of the ice queen or her sister Anna before.

Regina is on her own mission, wanting to track down the storybook’s author — and after not-so-deftly pumping Henry for theories, mother and son put down their Thor and S.H.I.E.L.D. comic books and agree to launch Operation Mongoose, to solve this mystery together. Regina then is summoned to the mayor’s office, to weigh in on Marian’s frozen state. Elsa suggests this might call for “true love’s kiss,” which Robin delivers (as Regina can barely look) — yet the smooch has no effect. Because, as Robin later professes 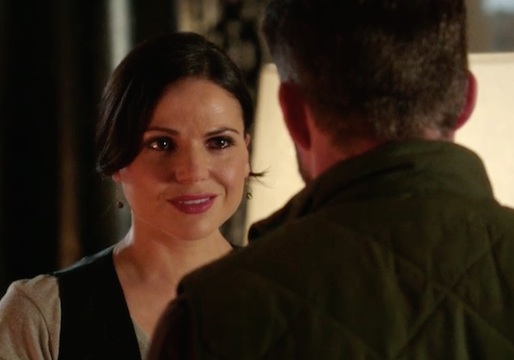 to Regina in private, he’s in love with someone else. Regina beams at the thought, then does best she can to help Marian, by plucking out her rival’s ticker before it gets frozen over.

RELATED Once Upon a Time at New York Comic-Con: Is #Swanovich the Next Sexy ‘Ship?

Emma and David search the woods for the town’s new foe, but instead find ex-Merry Man Will Scarlett rifling through Robin Hood’s tent. Scarlett wants nothing to do with one sheriff, let alone two (“That’s not even fair, is it!”) but he does share that while breaking into the ice cream parlor during the blackout, he noticed nothing was melting. Following that tip, Emma confirms that something is not right at Any Given Sundae, but lets Will flee in the process. Emma then frets to her father that something Regina taunted her about earlier is right, that she’s become the anti-savior.

Hook, though ordered by Emma to hide Elsa in the sheriff’s station, instead agrees to help the queen find out who else in town has ice magic. Hook revives his inner pirate to compel the Crocodile to assist in their endeavor, else he’ll tell Belle about the bogus blade. Gold thusly turns a lock of Marian’s frosted hair into snowflakes, which lead Hook and Elsa into the woods — where they briefly touch upon Hook’s love life and ultimately find the ice cream lady, decked out in her own regal splendor. Hook tries to phone Emma on the “ridiculous” cell phone, to no avail. Instead, he finds himself frozen in his tracks, while the Snow Queen confronts Elsa with some familiarity: “We have so much catching up to do.” When Elsa insists they’ve never met, the Snow Queen explains that the rock trolls had a role in helping her forgot certain memories, including a tragic one: that Anna trapped her in the urn.

The Snow Queen explains that she’s been trying to teach Elsa a lesson with the ice wall and such, proving that “ordinary” people will never accept her. And for good measure, she’s ready to impale Hook with a dozen icy stalactites. But just then, Emma shows up, distracts the “Dairy Queen” and busts out her own magic, launching Frosty onto her keister and whooshing Hook and David out of harm’s way. After the melee, Emma can’t help but wonder how the escaped Snow Queen seemed to know her….. 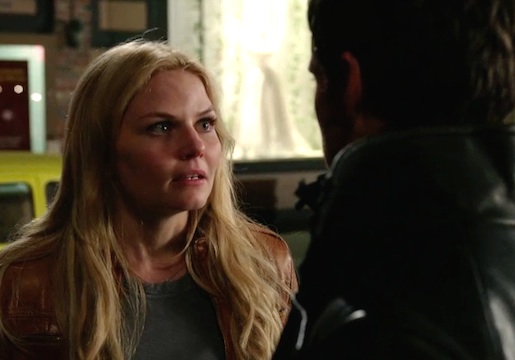 That night, Emma explains to Hook why she has been wary of his involvement with the deadly new threat: “Everyone I’ve been with is dead,” up to and including monkey boy Walsh, she explains. “I can’t lose you, too.” But as Hook notes, “If there’s one thing I’m good at, it’s surviving,” and the two come together for a steamy clinch. Meanwhile in the forest, Rumple sneaks up on the Snow Queen to say, “I’m sorry things didn’t work out the way you wanted,” and then hints at how bad it would be if Miss Swan remembered her. Is his assistance needed? “When I’m ready to make a deal,” the Snow Queen says, “I’ll come to you.”

IN ARENDELLE THAT WAS…. | Queen Elsa gets word that Hans is planning to attack Arendelle with an army. Kristoff does some recon and discovers that Hans is in search of an urn that can “trap” witches such as her. Kristoff and Elsa find the urn first, but don’t act fast enough and wind up captured by Hans and his sideburns. But when Hans goes to use the urn to “capture” Elsa, the glimmery goo inside instead evolves into a human form: the Snow Queen. After freezing Hans and scaring off his bros, Snow Queen gets a tour of Elsa’s castle, where — upon commenting on a portrait of Elsa and Anna’s mother — she reveals that she is the girls’ aunt, a sibling that Idun preferred to never speak of, being magical and all. Snow Queen then assures Elsa, “We’ll find Anna… together.”

NOTABLE QUOTABLES | “I didn’t try to kill her; I left her to die.”/”Important distinction”…. Archie urging supermom/supermayor Mary Margaret to “Let it go”…. “What do you think it says?”/”Dangerous Urn! Keep Away!”…. “Have you ever made a snowman come to life?” (Olaf reference!)

What did you think of “Rocky Road”? Slightly better character integration? Excited for Operation Mongoose? (Know why they chose that name?) And can we talk about how much Flashback Elsa looked like the animated one?