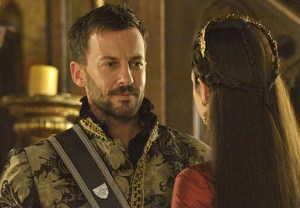 It turns out the plague isn’t the only troublesome addition to Reign‘s second season (Thursday, 9/8c). Craig Parker‘s Lord Narcisse has also arrived to shake things up, and he tells TVLine that his character has a “personal agenda” for everyone at Court.

For Francis, Narcisse will be a mentor; for Mary, a threat; and for Catherine, a lover? You’d better just keep reading for all of Parker’s “twisted” Season 2 teases…

TVLINE | I know we met Narcisse last week, but in your own words, can you introduce us to him?
He’s incredibly rich, richer than the royals. He runs France quietly behind the scenes. When Henry was king, Narcisse worked with him, funded him, kept the crown going. He’s used to real, quiet power. He enters a new Court with the old king dead, and I think he sees the need to teach this boy how to be a king, how to run things the way he wants them to be run.

TVLINE | And he’s no fan of Mary’s.
Oh, of course. His child has just been murdered by Mary, so there’s a very personal agenda going on as well. The new queen is in his sights.

TVLINE | Narcisse is being described as the “big bad” this season. Is that fair?
I wouldn’t say he’s a villain, exactly. The lovely thing about this show is that every script adds a new layer to this person. He definitely does monstrous things and has no guilt about doing what’s necessary, but there’s also a very human side to him. You never quite know how genuine he’s being. He’s a very good liar.

TVLINE | I’m told told Narcisse has a healthy sexual appetite. Can you confirm?
He definitely has a heart, and he’s looking for a woman that he can love and who can love him. Unfortunately, there’s a lot of scar tissue and monstrous behavior in his past, so the woman he’s going to find that with is going to have to be rather extraordinary. It’s fascinating what happens when his heart is revealed. Right now, he’s having an interesting time with one of the wonderful actresses on the show. It’s odd; it involves a lot of bathing, which is all I can say.

TVLINE | You sound like you’re describing Catherine to a T. What can we expect from those two?
Well, there is a relationship there between Narcisse and Catherine. They’ve known each other for years, they’ve seen each other do terrible things and they know the other is a shark — but there’s an attraction there, as well. [Megan Follows and I] had a number of scenes together when we were on location in Ireland, and we were holding looks and trying to throw as much as we could toward the writers for them to pick up on. I think that relationship will develop, but I’m not quite sure how. I’m not sure how twisted and awful and monstrous and wrong it may be, but it will definitely be fun. They’re like two velociraptors; it’s going to be glorious.

Reign fans, how do you think this will all play out? Browse Season 2 photos below, then drop a comment with your predictions.