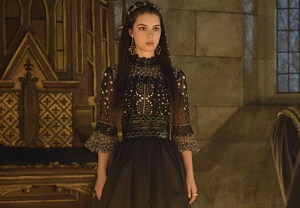 First, a brief recap: Mary and Nostradamus tricked Catherine into thinking she has the plague to prevent her from killing an innocent man; Narcisse, the man who requested the murder, ended up killing Leith’s girlfriend Yvette by mistake; Francis met his distant cousin Conde, before deciding to bring Lola and their son with him back to Court; and Pascal, the boy Kenna and Bash had been caring for, died of the plague. Rough stuff.

Below, McCarthy and star Adelaide Kane discuss tonight’s biggest twists and preview what’s to come as Season 2 marches on:

BABY BLUES | Don’t be fooled by the cuteness of Francis and Lola’s baby; that thing is trouble. “As the season progresses, having the child around becomes more of an unspoken pressure for Mary as she fails to conceive,” Kane says. “It’s a glaring reminder of her failing in what is essentially her only duty as a queen, which is to bear sons and continue the succession. The longer that takes, the more heavily it’s going to weigh on her and become a divisive factor in her relationship with Francis. … If they ever stop sharing a bed, there’s trouble on the horizon.” MO KASH, MO ‘PROBLEMS’ | Expect big things — but not always good things — from Bash in Season 2. “He will eventually become the King’s Deputy, the strongman for the king, which is a great position if the king is doing really well,” McCarthy explains. “But if the king is making mistakes and you’re the muscle for those mistakes, it can be really dangerous.” As for what’ll happen between Bash and Kenna, McCarthy says the same qualities we love about Kenna — she’s “lovely, charming, warm [and] incredibly ambitious” — will also “cause some problems” for them down the line.

GHOST WORLD | Speaking of Bash, are you wondering why he was the one to see that ghost in the premiere? McCarthy chalks it up to his exhaustion and the fact that his paganism leaves him more open to suggestion. That said, the ghost’s warning is not to be taken lightly. “The land is unstable, and people who have gotten away with murder might not get away with it for so long,” she says. (Heads up, Francis and Catherine!)

HEY DUDES | The premiere’s two newcomers, Conde and Narcisse, will find themselves heavily involved in the Catholic-Protestant tension this season — but that’s not all! “You’ll see some surprising pairings this season,” McCarthy says in regards to the new additions. “Conde really doesn’t have a problem being with married women … and Narcisse has a surprising sexuality to him. … Catherine’s going to have a lover, too.” (Hmm…)

SCARY MARY | Apparently tricking Catherine into thinking she has the plague was just the beginning of Mary’s evolution into, essentially, Catherine 2.0. “It’s nice to see her flip it on Catherine for once,” Kane says. “That was a very Catherine thing to do, and I like that Mary starts taking on more of those manipulative Catherine-esque elements; almost without realizing it, she’s becoming more and more like Catherine.” (Now that‘s scary!)

WEDDING BELLS | Two ladies in waiting — Lola and Greer — remain unmarried, and although McCarthy won’t reveal who will be heading down the aisle, she promises we “will see a wedding this season.” (Any guesses?) A CLOSE SHAVE | Nostradamus’ beard was, of course, the premiere’s most shocking casualty, and while it wasn’t directly addressed in the episode, McCarthy says she originally planned to give it a proper send-off. “We had a line in there, and we took it out, where he had wisely made himself clean shaven to show everybody, ‘I don’t have the plague. … No sores here!'” she explains. Apparently, the actor (Rossif Sutherland) had to ditch his face fur for another role.

DEADLY TRIANGLE | With Yvette now out of the way (RIP!), Leith has found himself a free man — but don’t expect Greer to break off her engagement to Lord Castleroy anytime soon. No matter how much she loves him, “the fear of being a ruined woman has ramifications,” McCarthy explains. And that fear is “going to loom large for her for some time.”

Your thoughts on what’s to come, Reign fans? Grade the season premiere below, browse Season 2 photos, then drop a comment with your full review.