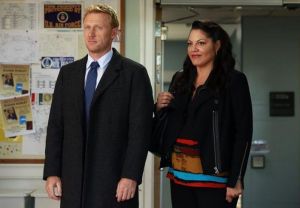 Somebody must’ve declared Thursday fight night, because almost everybody was ready to put up their (metaphorical) dukes in this week’s Grey’s Anatomy. While Alex and Miranda prepared to wage the Battle of the Board Seat, Owen made the mistake of going all “General Patton” on Callie — in her research lab, no less! — and Mer… Let’s just say that she would have sooner chopped down her family tree than add a branch to it for Maggie. Here’s how “Got to Be Real” shook out…

TWISTED SISTER | “Your junk’s spectacular,” Mer told Alex upon interrupting his shower. “Can we get back to me now?” Yes, so determined was she to prove that Maggie is no relation that she called in sick and recruited her new person – wet and naked – to help her get the goods on her supposed half sibling. (And drank his tequila for breakfast to boot.) Meanwhile, Maggie, unaware that Richard is her father, continued to bond with him. After he wowed her with his speedy removal of a tree branch from an impaled patient, he seemed poised to blurt out the truth. But alas, he lost her in the hall. (She must be a fast walker.) Later, Alex pulled a Willow Rosenberg that revealed to Mer that she and Maggie are, in fact, sisters. Off that shock, Mer confronted Richard, who admitted that he had known for the last week and wished like hell he had known for the last 30 years.

SHORT CIRCUIT | Although Owen guilted Callie into enlisting Veterans Rehab Hospital patients as subjects in her robotic limb study, it still seemed like a pretty nice idea. Or it did until Owen guaranteed results that he shouldn’t have and ordered Callie to “fix” a wounded warrior whose badly amputated leg made him ineligible for participation. Luckily, Jackson, who was hating being more of a hospital hall monitor than a doctor, offered up a solution that allowed Callie to come through for the soldier after all. And eventually Callie forgave Owen when he confessed that he was afraid, without something good happening, he might again become as dark as he was before Cristina came along.

CHANGING PRIORITIES | Put in her place early on (and then repeatedly) by no-nonsense Herman — “We are not peers” — Arizona was anything but a jolly good fellow. She was falling behind as fast as she was getting started! So when Callie mentioned her plans to work with more veterans, Arizona eagerly jumped at the idea that she was suggesting they put off having another kid, which of course infuriated her wife. “Say it,” Callie seethed. “You don’t want a baby.” Off this fight, it was Owen’s turn to be there for Callie.

SIBLING RIVALRY | Since Derek decided to stay in Seattle, he busied himself stepping on Amelia’s toes, re-marking his territory and putting April in the middle of the mess. Amelia’s response to his return as “king of the hospital”? “Bite me.” At least in the end a resentful Derek admitted to his sister that he had felt backed into a corner by Mer’s refusal to leave Seattle. In turn, Amelia made it pretty clear that she wasn’t about to just give up the turf that he had forfeited.

BATTLE LINES | Stephanie tried to help Miranda by rearranging her schedule so that she could spend more time getting ready for the board seat debate. But Bailey was so confident, she insisted she didn’t the assist. Until, that is, Stephanie pointed out what close ties Alex has to the various members of the board. For his part, Alex took his prep as seriously as he could while simultaneously tending to Mer. He really wanted the seat, he said, because Cristina’s faith in him made him think he might be capable of, you know, more.

AND THE WINNER IS… | Before heading into the big board meeting, Richard finally opened up to Maggie about his relationship with Ellis. However, instead of embrace him, Maggie lashed out, suggesting that only a coward would have withheld that information for so long after they met. Derek and Mer had a spat before hitting the boardroom, too: She was just about to blurt out that Maggie was her sister when he spat that he hadn’t given up his career so that she could stay in Seattle and get drunk with Alex. (Whoa.) So, basically, when Alex and Miranda pitched themselves to the board, everyone had to be too upset to really listen. Nonetheless, a decision was made. Miranda began to break down when Alex was called back into the room instead of her. But he emerged seconds later and grumbled, “Congratulations.”

OK, your turn. What did you think of the episode? Were you relieved to hear Derek admit that he resented being forced to give up D.C.? Surprised by Maggie’s reaction to Richard’s confession? Hit the comments!