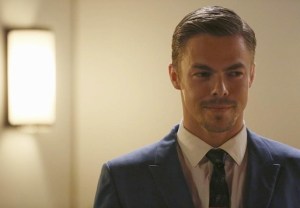 He’s waltzed, tangoed and cha-cha-cha’ed for years, but Dancing With the Stars pro Derek Hough had to learn a whole new routine in order to make his Nashville debut (ABC, Wednesday 10/9c).

“This really isn’t dance-related,” Hough tells TVLine, noting that other roles he’s had — the comedy Better With You, the upcoming film Make Your Move — allowed him to fall back on decades of training in fancy footwork. “This is the first one where it’s straight acting.”

It’s ironic, then, that Hough plays a hotshot Hollywood stud who crosses paths with neophyte actress Juliette. Read on to hear how their roles flip-flopped when the cameras were off, whether Juliette and Hough’s Noah West might put in some (ahem) extra rehearsal time together and why the five-time DWTS champ has taken to yelling “Life!” at this season’s partner Bethany Mota.

TVLINE | Your character, Noah West, is described as a charming, beguiling actor. What more can you tell us?
He’s not country at all. He has no country ties. He’s a Hollywood actor… It’s fun to be able to play a character within a character, because I play Noah West, who plays Patsy Cline’s husband [in the biopic]. That was fun, to be on a movie set while on a TV set.

TVLINE | Was it daunting, acting without the part having any sort of dance connection?
It’s funny… Hayden [Panettiere’s] character comes in, Juliette, and she’s not an experienced actress. I’m kind of making her feel at ease. In the first episode, there’s a scene [where] we’re sitting there, and I was twiddling my thumbs a little bit. She asked me if I was nervous, and I said, “A little bit,” and she was really comforting. She was wonderful. It’s funny how in the script, it’s the other way around. 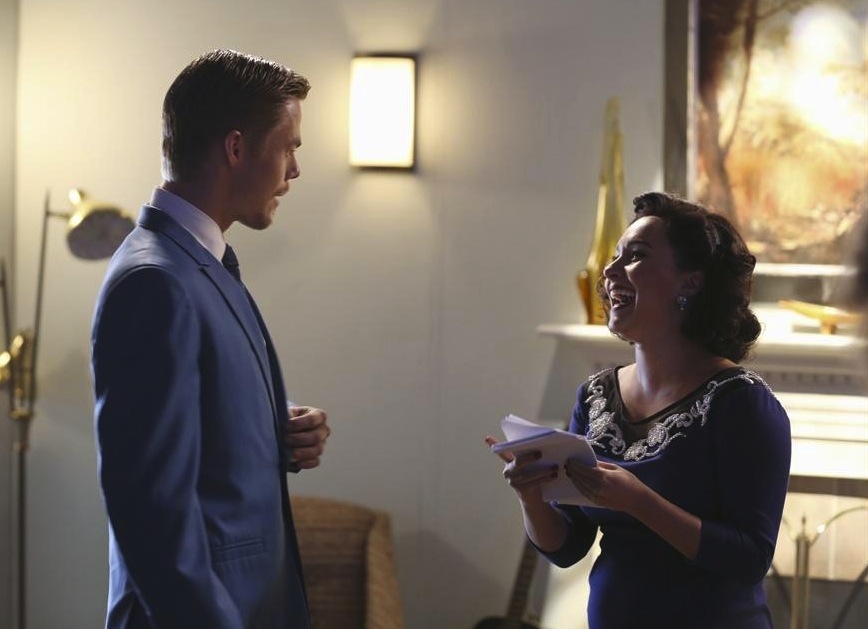 TVLINE | How would you characterize Noah’s interaction with Juliette overall? She can be cold when she wants to.
It’s been pretty positive.

TVLINE | You’ve teased that Noah and Juliette might be involved in a triangle.
She’s obviously a beautiful girl, and he’s a Hollywood actor. Yes, he is definitely attracted to her.

TVLINE | Dancing is more physically challenging than acting, but I’d imagine this part was tough, just because it’s a new thing for you.
It’s just different. To be honest with you, one of the most challenging things was the waiting around. I’m used to being part of a live show that’s very much like boom-boom-boom-boom-boom. Scripted television is a lot different. You’re there for maybe 10 hours, and you work for about two of those hours… I’m used to being able to tell a story with my body. To show expressions through words, it’s different. It’s a different experience.

TVLINE | Did filming Nashville overlap with this season of Dancing With the Stars?
I’m finished now, but I was still filming a week or two into the show.

TVLINE | Your partner, YouTube personality Bethany Mota, seems to be a real contender for the Mirrorball Trophy. Did you have a feeling that would be the case?
When I first started working with her, I just thought she was just adorable and the cutest thing ever, but I noticed she had bad posture. And it’s funny; it’s been an ongoing thing. I joke around with her and I say, “Life!,” meaning we need to work on her posture [in real life, not just on the dance floor]… Every time I say “Life!,” she pulls her shoulders back.