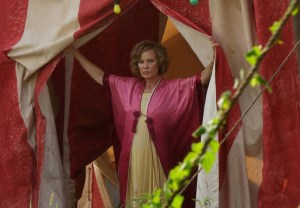 The premiere of American Horror Story: Freak Show is still 12 hours away — 15 for you west-coasters — but TVLine has some early scoop, including what co-creator Ryan Murphy calls “one of the most disturbing things we’ve ever done.”

Read on for five major teases from the brains behind the new season, including what you can expect from this year’s Halloween special. (Spoiler alert: It involves two faces and a potential gate to hell. You know, the usual.)

* Episode 4 will reveal everything you need to know (for now) about Freak Show‘s big bad, Twisty the Clown. “There’s a big story that explains … why he’s doing what he’s doing,” Murphy says. The episode is “somewhat based on an urban myth.”

* This year’s two-part Halloween episode revolves around Wes Bentley as Edward Mordrake, a real-life figure who was supposedly born with a face on the back of his head (one which whispered evil commands, no less). Per carnie lore, you’re not supposed to work on Halloween night for fear that your songs will summon Edward, who will come and drag one of you down to hell. “That’s also the episode where Jessica [Lange] sings Lana Del Rey,” Murphy adds,” which is quite something to behold.”

* Expect more conflict between Emma Roberts and Sarah Paulson’s characters this season! Roberts plays Jimmy’s (Evan Peters) love interest, and Dot — one of Paulson’s conjoined-twin personas — “has it out for [her] right away,” per Murphy.

* You might want to re-watch that title sequence, as Murphy notes it’s full of clues about what’s to come this season. (He even says the “intersex” character, the one with the leg where its gennies should be, “could appear.”)

* Murphy says Matt Bomer’s appearance in Episode 5 is two-fold: a seven-page encounter with Michael Chiklis, which Murphy describes as “a true horror scene,” followed by another part opposite Finn Wittrock. Murphy says he presented the character to Bomer as being “really f—ed up,” which sealed the deal for the White Collar star. One last clue? While on set, Bomer apparently said the whole experience had a “demented Tennessee Williams” feel. Go on, place your best guess.

Your thoughts on the upcoming season? What are you most excited to see? Browse new Freak Show photos, then drop your hopes and fears in the comments section below.