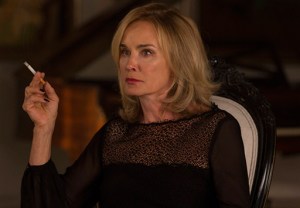 The stars and executive producer of American Horror Story: Coven — as well as Freak Show newbie Michael Chiklis — convened Saturday at San Diego Comic-Con, and they came bearing secrets about the upcoming season.

“I can tell you this, which is not much: It’s the best season so far,” executive producer Tim Minear ‘revealed.’ “It’s not like the first three seasons.” He said he recently saw a daily that he could only compare to a scene from Zodiac — but with sherbet. (Your guess is as good as ours.)

The cast was, however, allowed to reveal their character names, which are as follows:

As for the main monster of Freak Show, Minear revealed that it’s the show’s “scariest creation so far” and will be played by John Carroll Lynch.

That’s all they could reveal, plot-wise, though it sounds like the actors have already been through hell while shooting Episode 1.

“After my first scene last week — and this is a terrible confession to make — I couldn’t sleep until six in the morning, and then I slept for 30 hours,” Kathy Bates admitted, bursting into tears of laughter. “And that was without drugs, I swear to God. I think [Ryan Murphy] scares the s–t out of me.”

The upcoming season will also push the show’s production to new limits, particularly with Paulson’s two-headed character. (For the record, she prefers the Bette head because she feels “very organic” to her.)

“There are about 22 people working on every single shot that I do,” Paulson said. “How it will all come together I do not know, but it’s one of the hardest things I’ve ever done. I can’t just shoot all of Bette, then all of Dot. I feel like Sybil. I should call Sally Field and get some tips.”