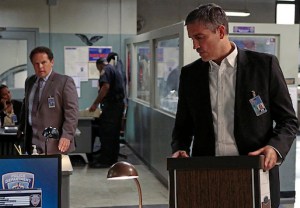 Tonight on Person of Interest (CBS, 10/9c), Detective Lionel Fusco finds himself under the tutelage of the latest POI, a professional “wingman” who has his work cut out for him (what with his client’s taste in sad ties and Florsheim shoes). The result is what Kevin Chapman hails as a lighter “departure” for the ever-evolving drama.

Here, Chapman — a onetime TVLine Performer of the Week — shares his thoughts on Fusco’s surprising partner in legit crimefighting, the new captain and what separates badass Root from badass Shaw.

VIDEO Person of Interest Sneak Peek: Will Finch Do The Machine a ‘Favor’?

TVLINE | What was your first reaction upon learning that this season Fusco’s new partner was going to be Reese?
[Laughs… a lot] It was something that, when they talked about it, I was like, “What?!” But I think that Reese is something that Fusco needs in his life at this point. Of course he’s putting a real cramp in Fusco’s style — here’s a guy that for three seasons has kind of tortured Fusco from the shadows and now all of a sudden he’s sitting across the desk from him. It’s really funny to see how the relationship is going to evolve because, as you know, Reese is not a guy always plays by the rules, so how is he going to handle working a very real job with a very real detective while needing to play by these rules? It’s not always going to be easy, and probably the most challenging piece of it all will be Fusco trying to…

TVLINE | “Smooth the rough edges.”
Exactly. It will be Fusco constantly covering for him but knowing that while he’s doing that, Reese is actually making a difference in the world.

TVLINE | We meet Fusco’s new captain this week (played by Lie to Me’s Monique Curnen), and she seems bit chill, offering a different take on the typical “hard-nosed, bull-headed superior always pounding their fist on the desk.” She’s more like, “If I get results, great.”
Right. I think that’s a reflection of police departments throughout the country. As you know, policing in this country has changed dramatically from what it was when I was a kid growing up, anyway. There are more rules and regulations, and it’s more about statistics and reach-outs and community policing, quality of life issues and that type of stuff. I haven’t talked to anyone in the writers room about this, but I feel like that is the approach they’re taking with this character as opposed to being this hard-nosed [superior]. I think that they’re getting more into the community policing-type administration.

TVLINE | So let’s talk about the “Wingman” episode. What does Fusco get himself caught up in? 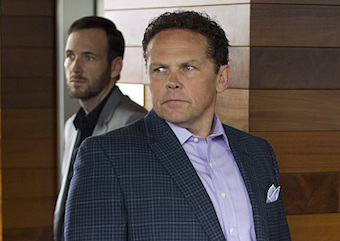 First of all, I was so excited when I read this episode because it’s such a departure from what we do as a show, week in and week out. I think the goal was to make a lighter episode of POI, and from what I’m told there was a pitch that involves just that, with Fusco at the heart of the piece. We don’t often get to do these personal stories on the show, so it was a really fun, action-packed adventure for everyone involved — the writers, the actors and the crew. I guess the whole wingman thing was inspired by a story that someone in the writers room had read, about these “social coaches” that do exist. The bulk of the storyline centered around Fusco and Reese’s newfound partnership, but it’s also important to the writers to make sure that the POI connects with one of the series regulars on some type of emotional level every episode. This episode was about Fusco and a reflection of his past relationships romantically and professionally. Fusco realizes that he and this wingman (Ray Donovan’s Ryan O’Nan) have more in common than he ever thought possible.

TVLINE | Once Fusco gets the makeover, does he find any success on the dating scene?
Come on, man, he’s a Fusco! [Laughs] How dare you ask a question like that.

TVLINE | Where would you place your own style? Somewhere between Original Fusco and New-and-Improved?
Exactly. I like to refer to myself as “The George Clooney of the Lane Bryant set.”

TVLINE | How would you distinguish Fusco’s dynamic with Shaw versus Root? 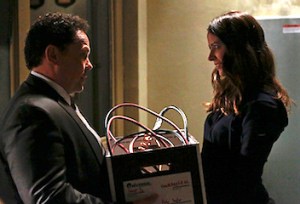 I think the relationship with Root (Amy Acker) is almost based on underlying fear, because he really doesn’t quite know how to take her. At least with Shaw (Sarah Shahi) he knows exactly what he’s getting, so he just kind of treats that accordingly, but Root is such a wild card that Fusco just doesn’t quite understand. I remember last season, when Root goes into this whole dialogue about how Fusco’s name came about — how his dad took him to the zoo and he saw the lion, and that’s how he became “Lionel” — and he’s just kind of looking at her like, “OK, what planet did this woman just drop in from?”

TVLINE | Because her character is so steeped in a mythology that he’s oblivious to.
Without a doubt. He really doesn’t understand what planet she could possibly be residing on, so I think that’s always his approach with Root.

TVLINE | Lastly, next month marks a year since we bid a sad adieu to Detective Carter. What do you miss most about having Taraji [P. Henson] on the set?
Oh, Taraji was just… first of all, she was so talented and so generous to work with. When you’re in scenes with her she’s right there with you. I wish her all the best on her new series [Fox’s midseason drama Empire].

TVLINE | Yeah, it looks good.
It does, and I hope it succeeds. I really wasn’t that familiar with her work prior to working with her on this show; I remember her from Benjamin Button and Hustle & Flow, but other than that…. But yeah, I really miss having her around.