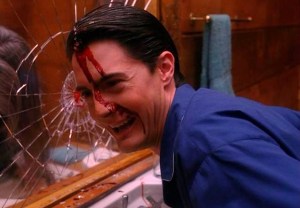 The final episode of Twin Peaks aired on June 10, 1991 — and the devastating (and let’s just say it: wholly disappointing) cliffhanger left us with far too many questions. (And far too few of those questions were answered by the 1992 prequel movie Fire Walk With Me).

As reported early Monday, the cable network has commissioned a nine-episode present-day continuation of David Lynch and Mark Frost’s classic ABC drama that will attempt to bring the series to a satisfying conclusion. We’re assuming that means at least some of Season 2’s innumerable loose threads will be tied up.

Below, we revisit 14 of those unsolved mysteries:

1 | When we left off, Agent Cooper was alive, but possessed by the spirit of Killer Bob (played by the late Frank Silva). Meanwhile “Good Dale” is trapped in the Black Lodge. Did Laura Palmer take Annie’s advice and write that information down in her diary (when a bloodied Annie showed up in Laura’s bed in a strange dream/premonition in Fire Walk With Me)? Will Laura’s diary be the key to Coop’s rescue in Season 3?

2 | How is Annie? The deleted scenes from FWWM (newly released in the Twin Peaks: The Missing Pieces Blu-ray box set) made it clear that Heather Graham’s alter ego survived her escape from the Black Lodge — and ended up in the hospital (where an unwise nurse stole her cursed “owl ring”). Did Annie recover? Did Evil Cooper come after her? 3 | Did Doc Hayward actually kill Ben Horne when he smashed his head into the fireplace?

4 | Was Audrey killed in the bank explosion? (FWIW, Sherilyn Fenn has since posited that Audrey survived and fled Twin Peaks for Hollywood.) Sadly, the bomb likely felled Andrew, Dell and Pete, seeing as how their respective portrayers, Dan O’Herlihy, Ed Wright and Jack Nance, have all since passed away.

5 | How is Audrey’s brother Johnny doing? Is he still pining for Laura?

6 | What happened to Leo? Last we saw him he was tied up in Windom Earle’s cabin with a cage of deadly spiders dangling above him. Did the cage drop? Did the spiders kill him? Did he escape? Was he rescued? Did he reform and actually set out to “Save Shelly”?

7 | Did Shelly accept Bobby’s marriage proposal? Or is she still with the (possibly-dead) Leo? Oh, and is she still slinging coffee and pie at the RR Diner?

RELATED Twin Peaks on Showtime: 15 Characters We Want Back

8 | Was Windom Earle killed in the Red Room when Killer Bob sucked out his soul?

9 | In the finale, Nadine “awoke” from her fantasy of being 18 again, but did she stay with husband Big Ed? Or did she toss him aside for teen-lover Mike? Related Q: Did Big Ed finally end up with Norma? a postcard from San Francisco). Did he ever return home?

11 | Did Josie bust out of the wooden drawer knob?

12 | Did overwhelming grief lead Palmer matriarch Sarah to take her own life? (Remember, she lost her husband, daughter and niece under horrifying circumstances.) Or is she filling her days watching bowling on TV?