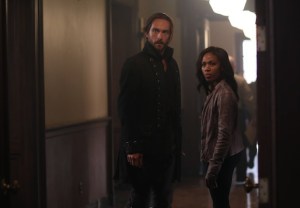 And you thought you had money problems.

This week’s Sleepy Hollow finds the town in the grips of a Henry-engineered plan to turn the good citizens against each other. The Horseman of War’s weapon of choice? A cursed coin with some historically bad mojo, as the Mills sisters learn firsthand.

The evil cash also brings into town a ray of hot, scruffy sunshine, and it sets up an hour that makes me want to become a full-fledged congregant of the Sisterhood of the Radiant Beharie — that’s how much leading lady Nicole shines during the ep.

But I’m getting ahead of myself. Let’s take a look at what goes down during “Root of All Evil.”

SAVINGS RAGE | Fresh off learning that Henry is Irving’s new lawyer — and that he’s barred them from visiting Frank at Tarrytown Psychiatric — Mills and Crane track the evil attorney into town. When Ichabod looks aghast at two men holding hands in a restaurant’s window, Abbie launches into a lecture about how much attitudes toward gays and lesbians have changed since Ich’s day. He responds that he was referring to the fact that one man was wearing a hat indoors; he knows about homosexuality, he sniffs, because he served under Baron Von Steubing (who apparently liked a man in uniform). “Also,” he adds, “I watched the finale of Glee.” (Ha!)

Their convo is cut short when they notice Henry leaving the bank… followed by gunfire from inside. A teller is losing her stuff in there, waving a gun around and talking about how no one appreciates her. Abbie tries to talk the woman down, but it’s no good; Sheriff Reyes takes the shot and kills her.

SILVER POISONING | Abbie’s stymied by the teller’s episode; up until then, she’d been a loyal and happy employee at the bank. But while watching security footage, Ichabod notices that just before she went mental, the woman pocketed a coin Henry brought in. (Side note: Abbie’s mild amusement at Ich asking her to “unspool” the video is one of those little things that make me adore this show.)

Crane recalls one of his back-in-the-day missions to get some silver coins out of British hands. Benedict Arnold also was on the mission, and he famously betrayed the country not long after his exposure to that silver. Might it have turned him? And if so, should the Witnesses be worried that some random guy from the bank crime scene grabbed the coin in question on his way out the door?

WELL, HELLO THERE… | Under the influence of that bad penny (it’s actually more like a quarter, but you know what I mean), the guy from the crime scene builds a bomb and blows up his father’s flower shop. It happens while Ichabod and Abbie are down by the river, meeting with Nick Hawley, Jenny’s “go-to guy for supernatural artifacts.” Hawley is Mal Reynolds by way of Point Break, all shaggy blonde hair and deep blue eyes and possibly a hidden agenda but good God, who cares? (Well, Ichabod surely does, but we’ll get to that in a moment.)

Hawley helps the Team WTF co-captains realize that the coin is likely a Tyrian shekel, aka one of the 30 pieces of silver Judas was paid to betray Jesus. And Henry all but confirms that when they run into him at the sheriff’s department, saying that the coin doesn’t turn people bad — it merely magnifies the anger they already have inside.

(Side note: Anyone else surprised that Abbie leaves Ichabod alone to talk with the horseman formerly known as Jeremy? This is the same man who has a track record of getting a little nutty when matters regarding his family arise. Maybe she had to run to the ladies’ lounge to touch up her hair, which is looking quite lovely this episode?) Ichabod tries to start over with his petulant son, who’s not having it. But Henry does get a good line in: “Your son’s a lawyer. You must be very proud.” (Heh.)

MILLS ON A MISSION | Later, Henry makes sure the bullion of bitchiness rolls right by Jenny while she’s doing her court-ordered community service. Earlier in the episode, she got quite mad when she learned that Reyes was the one who had Lori Mills locked up at Tarrytown. So it makes sense that shekel-controlled Jenny grabs a rifle and goes after the new sheriff, who’s out hunting in the forest. (Side note: I totally expected the coin to activate Jenny’s anger at Abbie for abandoning her for all those years; nice twist there, Sleepy Hollow.)

Ichabod accompanies Nick, with whom he grows hilariously irritated as the hour progresses, to a church to get some special stained glass that can counter the effects of the mean money. And once they track Jenny to the forest, Abbie gets right in front of her sister’s gun and breaks. stuff. down. Beharie gives a great monologue about not letting anger overtake them, because there may be aspects of their mother’s plight that they don’t know yet — and killing Reyes will hide those aspects forever. With an assist from Ichabod, they disarm and de-coin Miss Jenny… and then the coin almost works its wormy way with Abbie, but Crane kicks it away and Hawley catches it in the special glass. Yards away, Reyes has no idea how close she came to being Bambi’s mother.

MOTHER OF THE YEAR | Ichabod devises a clever way to get into the psychiatric hospital, which allows him to brief Irving on exactly how messed up everything is. Later, he and Abbie relax in a tavern while she reads to him from her mother’s file, a gift from Reyes. Seems like Lori Mills was tormented by the same demons that dogged her daughters, and that her suicide was driven by Moloch messing with her. He shares a final memory of a contrite Benedict Arnold, and she reaches for his hand (if you need me, I’ll be over here, ‘shippily warming my hands over the glow of a slooooow burn). Then Hawley shows up with a fake passport for Ichabod, but Crane still isn’t blondie bear’s biggest fan.

Meanwhile, back at Fredericks Manor, we watch Henry glower at the bed where he was born, then light it on fire with a wave of his hand. Looks like maybe mama’s comments are hitting home?

BEFORE YOU GO, LET’S TALK ABOUT… | No, seriously: Beharie rules in this episode. Often, the fact that Abbie swallows all of her emotions — and Crane wears his as conspicuously as a beer helmet at a tea party — makes it easy to ignore that Abs has had some real loss in her life. Beharie slightly softens her tough character here, and it’s lovely… Are we actually sure Katrina spied for Washington? Because it seems like she can’t even eavesdrop on Henry and Abraham without getting caught. (Nice new dress, though!)… I adore the subtle way the show is exploring Abbie’s unease about Katrina and about how wrapped up Ichabod is in saving her. Even if you’re not with me that there might be a small bit of jealousy there, it’s a delicious little thread they’re weaving into each episode of this season so far. And that redhead line was phenomenal…

Your turn. Hit the comments and let me know what you thought of the episode!