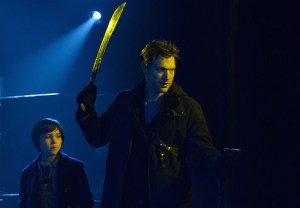 As FX’s The Strain scared up its freshman finale, Eph & Co. got a bead on The Master’s new hideout, Zach’s mom Kelly resurfaced and Gus was enlisted by an army.

RELATED The Strain Renewed for Season 2 by FX

After dreaming of the day his parents surprised him with a new bicycle, Zach awakes to the nightmare everyone now lives in, as the gr’ups ponder their next move — to find out where The Master is currently lying low during daylight, ’til his coffin is rebuilt. Eph and Fet surmise that their adversary is making camp at the old theater that turned rocker Gabriel Bolivar rented out. Fet then leads Eph to an underground tunnel that in olden times was used to shuttle bootleg liquor to the theater when it was a speakeasy. They follow the tunnel, then sneak upstairs to spy a buncha munchers nesting alongside the broken coffin — then turn tail until they can return with back-up.

Reconvening at Fet’s, Eph talks to Nora, who’s now darker than ever in the wake of her mother’s turning. When Eph posits that he can’t leave Zach alone to participate in the attack, Nora charges him to get like Rick Grimes and get his boy battle-ready! So, after Setrakian fits Zach with a silver sword all his own, Eph teaches the kid a few strigoi-skewering tricks, including how to (PRO TIP!) plunge deep into their bone-free bellies.

PHOTOS Quotes of the Week from The Strain, Sons and Other Shows

Eph, Fet, Zach, Nora, Setrakian and Dutch embark down the tunnel, where Fet uses some TNT to blast to bits a mob of strigoi who’d bunched up near the shaft of sunlight he created through a manhole. They then head upstairs to the theater, where The Master’s voice taunts “woodcarver” Setrakian — and the old man is ready to rumble: “It’s his turn to hear me! Let’s finish this!” So, as Fet and Dutch take on Setrakian, and Nora grapples with Bolivar, Setrakian tries to get his cuts in with The Master, to little effect. (Maybe if he didn’t overly telegraph his saber strikes? Yeesh.) But then Eph gets the idea to break some windows and splinter the attic with sunlight, seemingly impairing The Master. (Yet still, no one goes in for a savage slashing??) Finally, Setrakian gets in a solid strike, at which instant all of The Master’s nearby minions — Eichorst and his face full of silver nails included — abruptly abort their skirmishes and retreat into the shadows.

The Master then pitches himself out a picture window and onto a rooftop, where he doesn’t fry up into a crisp but almost defies the sun, and then scampers away down the side of the building to places unknown. This leaves the group gobsmacked, realizing that The Master cannot be felled by mere sunlight. (Me? I never would have assumed/imagined that the one called The Master was vulnerable to the most base of the strigoi weaknesses. But whatever.)

Faking asthmatic wheezing, Zach dupes everyone into making a stop at his mom’s house, just so that he can grab a photo album — at which point he and Eph spend an inordinate amount of time reminiscing about birthday cakes and such, here in the middle of a vampocalyspe. And then Kelly herself shows up, though Eph can’t/won’t get off a kill shot.

* Now as fit as a fiddle, Eldritch is cheesed off to realize that The Master bestowed upon him not immortality, but merely robust health: “What, am I on some waiting list?!” Eichorst assures his benefactor, “You will serve at his right hand eternally, eventually.” Eldritch — minus Fitzwilliams, who has decided to bail on his increasingly warped employer — then pays a visit to the panicky Secretary of Health and Human Services, if only to lob her over the railing onto the street far below. And on that note, Eph’s wimpy CDC boss gets a promotion!

* Abducted by the “good” strigoi army, Gus asks their leader, Quinlan, what is wanted with him. They note that he has a beef with Eichorst, and that he probably craves revenge for his mother’s and best friend’s turnings. Presenting him to a slumbering trio of Master-like “ancients,” Quinlan explains that “an ancient truce was broken, an act of war declared” by The Master — and they need a human soldier on their side of the fight. In return, Gus gets payback — and a “rich payday.”

What did you think of The Strain‘s first season finale? Did the melee with The Master end with a bit of a whimper? Any wishes/suggestions for Season 2?