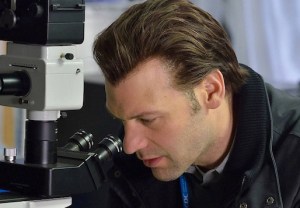 Apparently, a little Strain-ing is good for the bottom line.

FX has renewed its vampire-virus thriller The Strain, from executive producers Guillermo del Toro and Carlton Cuse, for a 13-episode second season that will debut in summer 2015.

The Strain, FX’s first original Sunday-night series, drew 12.7 million total viewers for its premiere, according to a network release.

“It is thrilling when you have a show that is a creative and commercial hit, which is a rare accomplishment in this increasingly crowded marketplace,” noted John Landgraf, CEO, FX Networks and FX Productions, in making the announement. “We look forward having [The Strain] on FX for as long as Carlton, Guillermo and Chuck Hogan need to tell this epic tale.”

Back in July — and prior to the series premiere — Cuse told TVLine he envisioned Season 1 of The Strain following the books’ initial installment, and that all told, “The plan is that the show will run somewhere between three and five seasons.”

As with Cuse’s best-known series, Lost, “We’re writing to an endpoint,” he added, “following the path as established in the novels, but obviously there’s a lot that is going to be added. The television show is its own experience. The show and the book can each be separately enjoyed.”

Excited about this renewal news? Sound off in the comments!