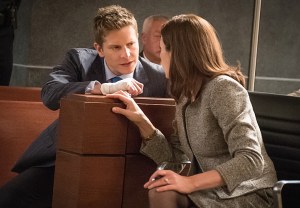 OK, nobody said that on this week’s installment of The Good Wife. But maybe, just maybe, a higher power whispered in the ear of our atheist protagonist Alicia Florrick and convinced her to rethink her stance against declaring her candidacy for State’s Attorney against that rat bastard fink James Castro. Then again, maybe it was just a combination of Good Angel (Gloria Steinem) and Bad Angel (Eli Gold) reminding Saint Alicia that it is, in fact, a woman’s prerogative to change her mind.

Whatever the case, Alicia’s last-act confrontation with Castro — in which he took the name of her slain lover Will Gardner in vain — was a gasp-inducing, delectable slice of TV drama. (And what a bold, to-the-jugular moment after an hour largely fueled by characters’ memories and court-case subtext!)

PHOTOS Quotes of the Week from Sleepy Hollow, Once, Bold & the Beautiful and More!

If I’d had any reservations about the “Run, Alicia, run!” drumbeat percolating beneath the surface of Season 6, well, I’m all in after Episode 3 (titled “Dear God”). Because there’s nothing like a Big Bad to make you want your favorite TV characters to put on their white hats — however irrevocably tarnished — and fight for what’s right. I mean, had The Good Wife been set in the wild, wild west, Castro might as well have kicked Alicia’s horse in the shins, tipped over her jug of moonshine and challenged her to a duel at 50 paces right in the middle of main street. I’m labeling this hour Rated I… for “It’s On!”

YOU’VE GOTTA HAVE FAITH | The “case of the week” finds Alicia and incoming partner Dean Levine-Wilkins taking over for Cary as the public face of the plaintiff’s side of a suit in which a farmer who’d developed a genetically modified super seed sued his neighbor for stealing his product in his own farming operations. The case winds up, by mutual agreement of plaintiff and defendant, in “Binding Christian Arbitration” — overseen by an even-handed but Scripture-driven moderator played by House‘s Robert Sean Leonard. Yet while the farmers in question eventually take battle out to the hallway and circumvent the squabbling legal brains in the room to find a mutually agreeable settlement, Alicia finds herself marveling at Dean’s ability to quote scripture — and his revelation that he’d almost become a priest as a teenager (’til he experienced To Kill a Mockingbird, anyway). “I don’t think I’m genetically built to believe in God,” admits Alicia, who has some killer  scenes discussing case-related scrpture with daughter Grace. Dean’s reply — “I didn’t think I was, either. Until I was” — hints that perhaps Mrs. Florrick is about to experience some kind of awakening (be it political, personal, religious or otherwise) that she/we hadn’t seen coming.

THERE’S A NEW GIRL IN TOWN | Linda Lavin continues The Good Wife‘s rich tradition of flawless, Emmy-worthy guest-casting through her turn as Joy Grubick, who never lets anyone think she’s more than a grimly competent, emotionally detached pre-trial service officer. In the episode, she’s helping to determine whether or not Cary remains free on bail for the drug-dealing charges waged against him by the current state’s attorney. And yet, as ADA Finn Polmar spars with Diane (now serving as Cary’s official legal counsel) over the disappearance of Lemond Bishop’s crew member (and confidential informant) Trey, it comes down to Joy’s observations to sway the court. As a former ADA, Cary fears retaliation in jail and therefore poses a flight risk, Joy notes, but on the other hand, the guy is clearly fighting for his business — and understands the fleeting nature of his freedom well enough to not engage in any illegal acts.

Nobody would probably accuse Kalinda of such moral clarity, though. Surveillance footage finds her talking to Bishop’s lackey Wes — and Finn uses it to argue she was sending a threatening message from Cary. The judge can’t be sure it’s true — especially since Trey’s wife’s affair with a dangerous character provides an alternate explanation for his disappearance. But later, Cary confronts his sometimes lover — I’m not even going to mention the up-against-the-window bump-and-grind session we saw in recent flashback (rated D…for DAYUM!) — and Kalinda all but admits she ratted out Trey to Lemond, then warned Trey to flee Chicago for parts more anonymous to avoid violent retribution. Hey, missing or dead, Trey’s lack of testimony sure benefits Mr. Agos, no?

FEMINIST MANIFESTO | Alicia keeps insisting she’s not running for State’s Attorney — even after Morning Edition runs a piece saying she’s already staffing up her campaign office. But when incumbent Castro shows up at her office to discuss Cary’s case — Alicia sagely notes he ought to be sitting down with the defenant, or with his attorney Diane — it’s clear he’s offering up a warning that she shouldn’t run against him. “Cary’s prosecution has nothing to do with politics,” Castro reassures slimily, “but it wouldn’t look good for your campaign” if everyone knew she was in legal bed with a drug dealer.

Alicia’s feet remain firmly planted against running — ’til she runs into feminist icon Gloria Steinem at a campaign event for hubby Peter. “We need more good women to run,” Steinem urges. The flattery clearly stays with Alicia, and in true, hilarious Good Wife fashion, we see Alicia twisting Steinem’s words in her mind — “Alicia, I’m tired, I need you to take over for me” — in a daydream that makes it clear which way her professional trajectory is headed.

The tide truly turns, however, after Alicia runs into Castro outside Cary’s hearing, and we get a delicious exchange in which Castro’s clear belief that Alicia is already running — and his utter contempt for her as a person — causes her to rethink her position, possibly out of spite, or possibly out of an altruistic idea that someone this gross shouldn’t have this much power. Let’s play it out, verbatim, even if half the deliciousness is in the pauses and subtle shifts in expression of Julianna Margulies and sparring partner Michael Cerveris.

Alicia: “You have something to say to me?”
Castro: “No.”
Alicia: “[Laughs] I doubt that. Men always have something to say.”
Castro: “No, after I put your partner away for 15 years, then I’ll have something to say.”
Alicia: “If you’re still in office.”
Castro: “[Laughs] So, that’s why you’re running – to get your partner off the hook. Or so you can keep your client, Lemond Bishop, out of jail…”
[Alicia walks away.]
Castro: “Or because your lover was gunned down in one of my courts. That’s the rumor anyway. Will Gardner was your lover. you blame me for his death. That’s why you’re running. Retribution.”
Alicia: “Anything else?”
[Alicia gets right in Castro’s face.]
Castro: “What do you want?”
Alicia: “No, get it all off your chest.”
Castro: “I have a lot on my chest. I’ll save it for the campaign.”
Alicia: [Casually] “Talk to you.”

There’s one major line left in the episode, and it drops as Alicia enters Eli’s office: “If I ran, what’s the plan?”

You know Eli has a six-month agenda already laid out in a Word Doc on his laptop. Let the games begin!

On that note, I turn it over to you…

What did you think of this week’s Good Wife episode? Are you more or less excited about Alicia running for office in the wake of her confrontation with Castro? And is Cary as doomed as he fears — or will he come through this whole prosecution a vindicated man? Sound off in the comments!