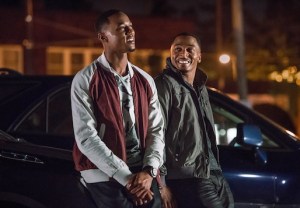 Jessie T. Usher and RonReaco Lee are here to tell you that you don’t need to know a three-pointer from a pump fake in order to enjoy their new, sports-themed Starz comedy, Survivor’s Remorse.

“You really don’t have to be into basketball,” Lee (Level Up) tells TVLine, describing the series as an examination of “the lifestyle that comes with being a pro baller, not so much the game.”

The people pulling back that curtain know of what they speak. Remorse‘s executive-producers include Cleveland Cavaliers forward LeBron James and his manager, Maverick Carter, as well as Mike O’Malley (Glee, Shameless) and Tom Werner (The Cosby Show). (O’Malley also serves as showrunner.)

In fact, the characters Usher and Lee play — basketball phenom Cam Calloway and his cousin/manager Reggie, respectively — are loosely based on James and Carter. In advance of the six-episode series’ premiere on Saturday (9/8c), Usher and Lee stopped by TVLine’s New York offices to talk about what to expect both on and off Survivor’s court.

TVLINE | At the outset, Survivor’s Remorse seems very reminiscent of Entourage. What’s your take on that?
RONREACO LEE | I would say, “Cool,” because Entourage was a great show. It had a great run. They’re about to release a feature film… That’s a good thing.
JESSIE USHER | Exactly. I’ll take that comparison any day.

TVLINE | LeBron James and his manager, Maverick Carter, are both executive producers on your show. I’ve read that LeBron is not super hands-on, but Maverick is.
USHER | Maverick came to set often. He was there throughout the entire audition process for me.
LEE | He was really involved, which was great. Obviously when I first met him, I was a little nervous, because this show is not about LeBron, per se, but it’s loosely the relationship between an extremely successful basketball player and his good friend and manager. In theory, I’m playing the Maverick part just like [Usher] is playing the LeBron part… [Carter] just embraced me and really made me feel like he liked the choices I made.

TVLINE | RonReaco, how did Reggie become such a good manager?
LEE | [That] was a question I asked in prepation… One thing you could attribute it to was that Reggie married very well… Reggie had to straighten up to be with a woman like Missy [played by Mad Men‘s Teyonah Parris], and he did. She challenged him to be the best that he could be. And part of that was, if he was going to manage Cam, he was going to have to learn how to manage Cam. [However,] he’s also a fish out of water in that he makes some mistakes. You’ll see it toward the end of the season.

TVLINE | What about Cam? Any romance for him this season — aside from the scantily clad woman in the pilot, God bless her?
USHER | [Laughs] God bless her. There’s a few surprises. TVLINE | What can you tell us about Cam’s relationship with his mom (played by Tichina Arnold, Everybody Hates Chris) and sister M-Chuck (played by Erica Ash, MADtv)?
USHER | They do touch on the fact that we were raised by a single mother and that she always wasn’t there for us. So my older sister had to play that role quite a bit, and she had to protect me and raise me and teach me a lot of things when my mother wasn’t there… so I look at her differently than just an older sister.

TVLINE | Jessie, I can’t believe it took me this long to ask you this, but can you actually play basketball?
USHER | You sound like the group of people who auditioned me for this. [Laughs] It wasn’t until my very last audition I was walking out of the room and they said, “Do you play basketball?” Just like that. I was like, “Yeah. You all didn’t know that until now?” They honestly didn’t even care to ask me before that. It wasn’t that big of a deal, because [the show wants] to focus on things outside of the game. But I can play basketball.