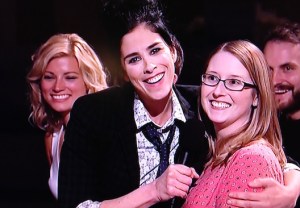 Is success really the best revenge? Sarah Silverman certainly made a case for the old adage when she returned this week to Saturday Night Live — after lasting for only one season as a featured player in the early ’90s — and proved herself a rock-solid host able to score laughs across a variety of setups.

Oh sure, the show’s writing staff squandered several solid ideas by failing to push them to their most outrageous end points — the “Whites” ad and Vitamix infomercial were amusing when they should’ve/could’ve been uproarious — but you can’t pin those issues on Silverman.

RELATED Bill Hader Returning to SNL as Host — Will Stefon Be Joining Him?

Below, my picks for the week’s best and worst sketches (in an episode I’d grade as a solid ‘B’).

BEST | Joan Rivers in Heaven
Silverman captured the late, groundbreaking comic’s gruff, bawdy delivery in a mix of self-deprecating one liners (“the last time someone was inside of me, it was [daughter] Melissa!”) and inappropriate hilarity (grousing that late Apple CEO Steve Jobs should be forced to upgrade his casket every six months to see how the rest of the world feels about their iPhones). Bonus awesomeness courtesy of Bobby Moynihan as befuddled and bi-curious Ben Franklin.

BEST | Opening Monologue
Silverman gave half her monologue while nestled in the lap of a random female audience member and mining the woman’s mild discomfort for material: (“Am I sitting on your phone?” “No.” “Ohhhh…”) Yeah, it’s easy to praise a famous standup for excelling at standup — but I guffawed at that blacked-out/censored cue card (with only the phrases “black guy” and “God’s mouth” left in tact) and the extended rumination on wanting to be bathed and carried like a baby.

BEST | The Fault in Our Stars 2: The Ebola in Our Everything
Obvious? Maybe. Topical? Absolutely. Upgraded by Silverman and Taran Killam’s respective performances as an ailing teen who just wants to hop on a bus or a plane and explore the world and a kid who’s just professed his love — and now can’t stop thinking about contracting the brutal, highly contagious virus from his clueless girlfriend? You betcha. Best line? “If doctors know so much, then why is my doctor dead from Ebola?”

WORST | President Barack Obama on 60 Minutes
Why is it that two weeks running, SNL‘s cold open has been about as funny as lit matches jammed between one’s toes? This bit about President Obama marveling at ISIS’ social-media strategy — i.e., Tweeting “We will destroy the infidels. #ThankYouJeter” — played it safe when it needed to be cray-cray. And it didn’t help that Beck Bennett and Jay Pharoah brought nothing especially sharp or funny to the roles of Steve Kroft and POTUS.

WORST | Forgotten TV Gems
Kenan Thompson (at his “I’m amused with myself from word one” worst) played a blithering host of Forgotten TV Gems as he looked back at Supportive Women — a soap that drew the “opposite of droves” of viewers by eschewing cattiness for cooperation among its female characters. Granted, there was a kernel of an idea about soap tropes and feminism here, but it got buried under a pile of turgid punch lines.

What did you think of this week’s SNL? How would you rate Silverman as a host? What was your favorite sketch? Take our poll below, then sound off in the comments!