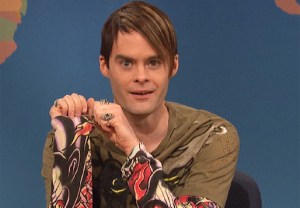 Saturday Night Live is welcoming back its prodigal son — well, one of them, anyway.

Bill Hader, an eight-season SNL veteran, will return to Studio B on Oct. 11 as host, along with musical guest Hozier.

So, which of Hader’s infamous characters are you hoping to see next month? Drop a comment with your wish list below.