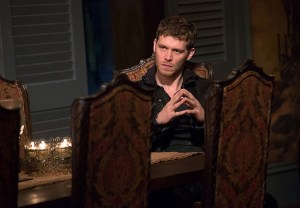 Everyone’s gunning for Klaus when The Originals returns for Season 2 on Monday (The CW, 8/7c), which really puts a damper on a hybrid’s love life.

Both of his parents have returned from the dead for revenge, Francesca and her clan have taken over the Quarter and who only knows what other troubles await the Original and his family.

With so many threats nipping at Klaus’ heels, it sounds like there’s not much time for romance, certainly not any that will end well for either party, star Joseph Morgan reveals below. (Sorry, ‘shippers of all kinds.)

The actor also previews Klaus’ “struggle” with Hayley, his plan for retribution and more.

TVLINE | You’ve got Guerra werewolves, the Originals coming back from the dead, a new hybrid in Hayley. How is Klaus juggling everything?
Not well. He’s dropping balls all over the place. [Laughs] It’s tough for him. He’s been in this self-imposed exile in the compound for about four months. He’s struggling with the idea of not taking revenge on those who forced his daughter out of New Orleans. When we find him at the beginning of Season 2, the time has come for them, with the help of some friends, to [put] the plan they have into action and to seek revenge on those people he believes are responsible. He spent the time semi-productive, formulating a plan. Also, a lot of painting, which as we know is his method of control.

TVLINE | Klaus seems to have a million enemies in Season 2. Which is the most threatening?
[His parents are] both threatening in different ways. I couldn’t say because his father was very physically imposing… And his mother is incredibly emotionally manipulative. So they each have their tools that they use to try and get what they want, which, in fact, is where Klaus has learned that. Seeing a little more of the parents and how they to intend to get what they want, we can learn a lot more about Klaus. But I’m not sure which one is the more threatening. It depends which day of the week you catch them on.

TVLINE | Considering how many Originals have been killed off or, in the case of Rebekah, fled town, did you think Klaus would be surrounded by so many of them again?
I always hoped that the show wouldn’t just become The Original, that we would have more family members involved. I think that the idea [is] that they come in and out of the show and affect the lives of the core group. I never know what to predict because the show has so many twists and turns. It’s really a roller coaster. TVLINE | Speaking of family, what kind of a presence will Rebekah have in the new season?
Klaus teased that she’ll be back at some point, so I’m hoping she’ll have a fairly decent presence. I know that the brothers, they’re balanced nicely by their sister. She’s definitely a presence that they miss. Their dynamic suffers for her absence. I hope she plays a part in their lives and in Season 2, as well.

TVLINE | For all these new enemies, will Klaus be gaining any new allies to balance the scales?
He’s not so good with allies, is he? He doesn’t play well with others. He’s good at temporary allies, like allies for an episode or two and then the old stab-in-the-back or whatever. He works with other people, but there’s no sort of fast ally that he has that’s solid there for him from the beginning to the end. He fluctuates. When it suits him, he allies himself with other people. When it doesn’t, he’s the first one to jump ship. TVLINE | How will his relationship with Hayley develop as she pulls away from Elijah?
The three of them are like strangers when we find them. They very much feel the absence of Hope since evacuating her with Rebekah. There’s definitely a frustration there for Klaus, being around her, because she reminds him of what he’s lost. These are two people who really shouldn’t be in each other’s lives, but they have to be because they have a child. Because of that, they’re family, whether they like it or not. They have to learn to find some sort of equilibrium. Elijah and Klaus and Hayley work best when they’re on the same team, but it’s just very hard to get them to that place where they all agree on what should be done. It’s a struggle for him and for her to deal with the shared responsibility of this new being.

TVLINE | Could Klaus and Hayley ever turn romantic? Or are Klaus and Elijah so over being in love with the same girl?
No, I don’t think that will ever happen.

TVLINE | Is there any romance in store for Klaus then? Perhaps with Cami?
I don’t think so. I don’t know. I hope not for Cami’s sake because he seems to destroy anyone that has any potential of getting close to him. He sabotages that relationship. They self-destructed in that way. So I don’t know of any love interests for him. But if there are, I’m sure it won’t end very well.

TVLINE | Klaus made a very memorable visit to Mystic Falls last season. Is Caroline on his mind at all?
Not that I know of.