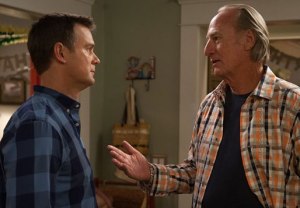 Most. Emotional. Birthday. Ever.

On Thursday’s episode of Parenthood, Zeek’s initial refusal to undergo heart surgery opened the floodgates for the Bravermans, leading to a birthday celebration that was among the series’ most bittersweet moments.

Zeek’s stubbornness begins at a doctor’s appointment, where his cardiologist confirms that he’s suffering from a mitral valve regurgitation — definitely had to Google that — and heart surgery, which was once a last resort, is now the only feasible option. But the pleas from Zeek’s doc and his family fall on deaf ears. Camille says they need to have a conversation about how to proceed? She’s shut down. Crosby tries to persuade his dad that surgery is the best option? Zeek convinces him otherwise. And underscoring all of this is the realization (for Jabbar, at least) that Zeek is turning 72, and no one in the family can confidently say how much longer Zeek will be around. (And that is the most morbid sentence I’ve ever typed. Thanks, Parenthood!)

RELATED  Gilmore Girls on Netflix: 25 Must-Watch Episodes (And 7 You Can Totally Skip)

It isn’t until later that evening, at Zeek’s birthday party with the family, that he realizes just how important the surgery is — and it’s Amber who opens his eyes. During a quiet moment on the front steps, Amber bursts into tears upon telling her grandfather that she’s pregnant, asking, “Are you disappointed in me?” I never thought I’d see a Zeek-Amber scene more touching than the post-car crash tough love he gave her a few seasons back. But this one trumps it, without a doubt, as Zeek holds Amber and tells her that parenthood — ha! See what I did there? — is magic.

After the party comes to a close — sweet festivities that include a birthday song from the grandkids, and a truly awful gluten-free cake from Julia — Zeek tells Camille that Amber is pregnant… and that he’s going to go through with the surgery. Has a bigger collective sigh of relief ever been breathed? I think not.

But the hour certainly wasn’t all about the family patriarch. What happened with the other Bravermans in Thursday’s episode? Here are the highlights:

AMBER & SARAH | For most of the hour, Zeek’s reaction to Amber’s big news is the only positive feedback she gets. After hearing that her daughter is expecting, Sarah is positively stunned. Even when she tries to make up for being shocked, her second conversation with Amber goes equally poorly. (“It’s not that I wish you weren’t doing it. It’s that I wish you weren’t doing it now.”) But later, after Amber has gotten some reassurance from her grandfather, Sarah stops by and reminisces on Amber’s old baby photos. “I forgot to tell you about all the good stuff,” Sarah admits, and the only thing keeping me from ugly-crying is the photo of a young Mae Whitman in a seriously unfashionable onesie. The horror!

RELATED  A to Z Star Cristin Milioti Talks Hitting the Rom-Com Jackpot (Again) — Plus: Why HIMYM‘s Ending Was ‘Brave’

JOEL & JULIA | When Joel and Julia are called into a meeting with Sydney’s teacher, they learn that Sydney has been bullying her overweight classmate and excluding her from their group of friends, something that could be stemming from Joel and Julia’s separation. When Joel tries to talk to his estranged wife afterward and discuss their marriage (or whatever it’s considered these days), Julia won’t budge. “You destroyed us! All of us!” she yells, and Joel immediately cops to his poor behavior. But there is a glimmer of hope at the end of the hour: After Sydney throws a temper tantrum when her parents confront the bullying topic, Julia researches the characteristics of a bully — and reaches out to Joel as she tries to figure out what to do. (Also, let’s just get this out in the open: I think Joel and Julia are the only two people surprised that Sydney is a bully. Moving on!)

KRISTINA & ADAM | When the lunch vendor at Chambers Academy quits because of Kristina’s excessive lunchtime requests, Adam springs into action and helps create a culinary arts elective at the school, through which Adam and the students will prepare all the hot lunches each day. The kids’ first cooking lesson goes poorly — though to be fair, I had no idea how to define gluten, either — but when Kristina gets positive feedback from the parents, they decide to keep the program around for a while longer.

OK, your turn. What did you think of the episode? Is it possible that the previews for next week’s episode are making you more emotional than this week’s episode? Sound off in the comments!