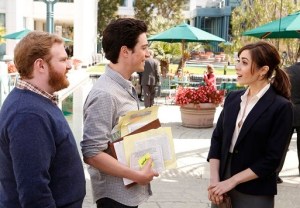 This fall’s TV schedule is full of rom-coms, and the latest entry into the club on Thursday night is NBC’s How I Met Your Mother-meets-(500) Days of Summer-eseque A to Z. Was it A for adorable? Or Z for zzzzzz?

Before you ghit the comments with your thoughts, a recap of the pilot: Andrew (played by Mad Men‘s Ben Feldman) is a guy’s guy with a secret romantic side, evidenced — as the narrator(Sons of Anarchy‘s Katey Sagal) tells us — by his listening to Celine Dion in the car. Zelda (How I Met Your Mother‘s Cristin Milioti) is a girly girl who likes order and control thanks to the crazy way her mom brought her up; naturally, she’s a lawyer. They “will date for eight months, three weeks, five days and one hour,” the narrator reveals. “This program is a comprehensive account of their relationship – from A to Z.”

And so we begin at “A Is for Acquaintances,” AKA the day that Andrew and Zelda finally meet. Andrew works at the dating site Wallflower, and Zelda comes in for an interview about her experience/to get her friend’s money back. Andrew immediately takes a liking to her; Zelda wonders if they’ve met before. As it turns out, her office is just across the office park from his, and they’ve been within five feet of each other on 19 different occasions since her firm moved to the location two months ago.

But the moment they actually first saw each other took place at a concert where Andrew spotted a mystery girl in a silver dress and thought, “‘I wish I was here with that girl’… I pictured our entire lives together,” he tells Zelda on their first date. “This is destiny.”

Zelda, however, feels differently. As a lawyer, she believes you can find evidence to prove anything. Plus, her mom was also into destiny — and divorce. To put the final nail in Andrew’s heart, she says she doesn’t own a silver dress and that they should be just friends. Still, Andrew is convinced it was her in the silver dress, just like he’s sure there’s a conspiracy to hide Back to the Future hover boards from kids, and he’s going to prove that both are true. He tasks two Wallflower programmers, Lora (Treme‘s Hong Chau) and Dinesh (Outsourced‘s Parvesh Cheena), who have their own tortured romance — “If you believe in The One, you must also accept the fact that The Negative One also exists,” Dinesh declares — to dig up proof that Zelda was there. And they deliver, but with a caveat: She attended Night 2 of the concert, and she didn’t wear a silver dress. (Possibly even worse news for Andrew: During a chance encounter, Lea Thompson confirms hover boards aren’t real — or are they?)

At first, Zelda is furious that Andrew violated her privacy, but then she realizes she’s never had a guy try so hard for her. She finally admits to him that it was her he saw that evening at the show — her stupid ex made her go to both nights. Cue flashback to that fateful moment and that magical silver dress because, whoa, did you see those curves?

“I scared myself off,” Zelda confesses to Andrew. “Maybe I could use a little meant-to-be in my life.” And she gets it as he cuts her off with a kiss.

Out of this season’s rom-coms — Selfie, Marry Me, Manhattan Love Story — A to Z is the most classic, modern love story with a dash of quirky humor. And you just can’t beat the Lea-Thompson-on-a-hover-board tag, which is perhaps the most HIMYM-est things A to Z does in the series premiere. Plus, Feldman and Milioti are so ridiculously adorable together; you have to wonder how Milioti keeps hitting the romantic chemistry jackpot. And when will Andrew and Zelda have ridiculously cute kids together, because I refuse to believe they might break up after those eight months, three weeks, five days and one hour?

As with most rom-coms, the best friends aren’t as well-developed, but I did like this part: After Zelda’s friend Stephie (Being Human‘s Lenora Crichlow) finds out the jazz musician she met is really Andrew’s buddy Stu (The Wolf of Wall Street‘s Henry Zebrowski), the narrator informs us, “Stu met Steffie at a Burlington Coat Factory in Tustin. The odds that she would be Zelda’s best friend: 7 million to one. Destiny cuts both ways.”

And finally, a few of my favorites lines from the pilot:

* Technically, not a quote, but those drink names — the Martini Navratilova, the Martini Luther King Jr. — were a nice touch.

What did you think of A to Z‘s acquaintances? Grade it in our poll below, then sound off in the comments!