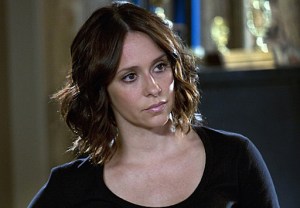 As CBS’ Criminal Minds kicked off its 10th season on Wednesday night, Jennifer Love Hewitt lent a, um, hand as the BAU tracked an UnSub who leaves behind only his victims’ torsos. By hour’s end, had noob Kate Callahan won you over?

The premiere opened with Callahan sweet-talking a purveyor of child porn, then all but laughing in his face when he (as they all do, she notes) falls for the usual sting, hauled away in handcuffs. Next we see her, she is riding up the elevator to 6 with Reid, who recognizes her from karaoke night at Rossi’s old bar (Season 9, Episode 7). Turns out, Callahan is there to interview for the BAU spot Blake vacated when she moved to Boston to teach. And even though Hotch has passed on nine candidates before her — while Prentiss declined an invite to rejoin the team — Callahan’s record impresses him, so she is hired on the spot.

And her first case with the BAU is a doozy — an UnSub who removes his victims’ arms, legs and head, then leaves the torso somewhere to be found. In the early going, Dawson’s Creek‘s Kerr Smith looks to be our guy, but no, he “just” buys the amputated limbs, having kicked things up a notch since his days of doing bad things to mannequin parts. The next big lead brings the team to someone’s apartment, but it turns out that it belongs to the very first, male victim, who was framed as the UnSub post mortem.

Tracking that vic’s phone registry ultimately leads the team to the farm where the UnSub is having second thoughts about his latest target, seeing as she’s a smart girl who is chatting him up and making things personal. But first chance she gets, and with one arm already lopped, she makes a run for it, and just as the BAU storms the place. Callahan gets wounded in the scuffle, but Hotch guns down the perp before he can do real damage.

But are things not over over? As the hour draws to a close, we see another jogger — just like the one who managed to flee the UnSub — get asked by a kindly middle-aged passenger for directions before getting grabbed and thrown into a van. What follows is a montage of men — polished, bland, skeevy — “shopping” on a website that puts young women up for auction. And as they refresh their screens, the just-grabbed jogger gets added to the inventory.

Also in the Season 10 premiere: As revealed in Fall Preview, Garcia and Reid are each still feeling the aftereffects of the Season 9 finale shooting. (She’s getting by on just a few hours of sleep, if only to avoid nightmares, while he is visibly still “feeling” the trauma to his neck.) And as hinted by show runner Erica Messer in interviews, we learned a little something about Callahan as the episode winded down — that she has a teenage girl in her charge.

What did you think of the season opener, and the seed planted for a multi-episode arc? And was anyone else impressed by how Love Hewitt — whom some thought to be a “jarring” bit of casting — in fact blended right in?